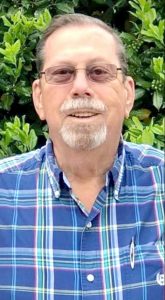 The greatest storyteller on earth has taken his tales to heaven. Larry J. Riddle, 77, passed away from cancer, at his home in Taylorsville, on January 29, 2021. His positive attitude, determination and charm, along with his warm smile and a quick wink, always made him a favorite among his oncology nurses.

After graduating from LeRoy High School, Larry joined the Army and was stationed in Arlington Heights, Illinois. He then worked for McLean County Service Company (Evergreen FS) for 37 years, where he was a salesman and later the Service Manager at FS Farmtown.

Left to do their best to carry on his stories are his wife, Kathy Kerwin Riddle of Taylorsville; their daughter, Deb (Ernie) Green, and granddaughter, Carlee Green of Claremont. Also cherishing his stories and memory are his nephews, Tom Lauritson, Harold W. Riddle, and Scott Riddle, and niece, Tammie Bossingham, as well as their families.

Carlee was the one thing that could pull Larry from his deep McLean County roots and get him to move across the country to North Carolina, where he spent his retirement years enjoying time with her and traveling to buy or sell primitive antiques (sometimes on just a handshake!). He stayed close to his Illinois roots when helping his brother, Les, with his Percheron draft horses at the state fair.

Larry not only collected antiques, but he collected friends and included many in his family. Those who enjoyed being brought into his life are, Karen and Rick Graber; along with their children, Kenzi (Brian) Foley and Kent Graber; grandchildren, Brilee and Kendall, all of Minier, Illinois; as well as Melody (Dan) Percy and daughters, Megan and Sarah of St. Peter’s, Missouri.

Larry was not anxious to leave his loved ones behind, but he was going to enjoy reuniting with those that left before him including his parents, Harold T. and June M. Riddle; sister, JoAnn Lauritson; brother, Les Riddle; along with special friend, Gene Tyner.

Often described as a gregarious and a generous guy, Larry delighted in doing the unexpected for others. Many have been the recipient of his surprises, such as finding your meal paid for or his appearances at weddings and funerals after having driven 12 hours one way just to support the families he cared about.

A Celebration of Life will be held in Illinois at a later date. Memorials may be made to your local hospice or the 957 Mobile Cafe, Taylorsville. (www.957mobilecafe.org)

Adams Funeral Home and Cremation Services is honored to be serving the family of Larry J. Riddle.

To honor Larry, the family encourages you to do unexpected, unsolicited acts of kindness as often as you can so his kind, generous spirit may live on through your selfless acts.