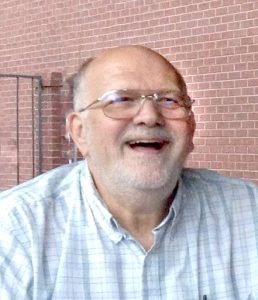 Monte was born on April 1, 1949, in Stony Point, to Gilbert and Nellie Sharpe. After high school in Stony Point, Monte studied history and divinity and graduated from Brevard College and James Madison University. He later attended Appalachian State University, where he studied dramatic arts and spent several years performing in the outdoor historical drama Horn in the West.

After retiring in 2014 from his role as cabinetry specialist at Lowe’s Home Improvement in Salisbury, Monte returned to his homeplace in Hiddenite, where he lived surrounded by the family and countryside he so dearly loved. Monte’s lifelong passions were his faith, music, and the written word. He leaves behind a body of poetry and music which will be preserved at the Alexander County Library.

Monte will be warmly remembered by his family and the many friends he made living and working in Nashville, Boone, and Salisbury.

Visitation will be at Adams Funeral Home, 307 Main Avenue Drive, Taylorsville, on Sunday, February 7, 2021, from 12:30 until 2 p.m., to be followed by a graveside service at South River United Methodist Church, 2540 Cheatham Ford Road, Hiddenite, at 3 p.m.

In lieu of flowers, donations can be made to the South River United Methodist Church Cemetery Fund, care of Gilbert Sharpe, 1900 Cheatham Ford Road, Hiddenite, NC 28636.

Adams Funeral Home and Cremation Services is honored to be serving the family of Monte Dale Sharpe.