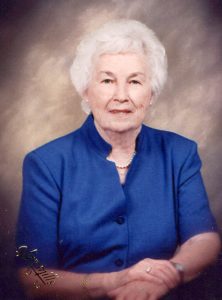 Virginia Gentry Fortner, of Kannapolis, passed away on Thursday, February 4, 2021.

She was born March 6, 1925, in Roxboro, the daughter of the late William Henry Gentry and Lelia Chandler Gentry.

She attended Person County schools and received a RN Degree from the NC Baptist Hospital School of Nursing in 1945. Virginia was a homemaker and dedicated wife, loved sewing and crafting and her garden of beautiful flowers, and her family.

She was a member of First Baptist Church of Enochville and Blanche Sellers Sunday school class.

We would like to express our gratitude to all of her caregivers, especially Arlene Cobler.

A private graveside service will be conducted at Lebanon Baptist Church Cemetery, in Alexander County, with Pastor Lewis Whittington officiating.

In lieu of flowers, donations can be sent to First Baptist Church of Enochville.

Condolence may be sent to: www.adamsfunerals.com.

Adams Funeral Home and Cremation Services is honored to be serving the family of Virginia Gentry Fortner.