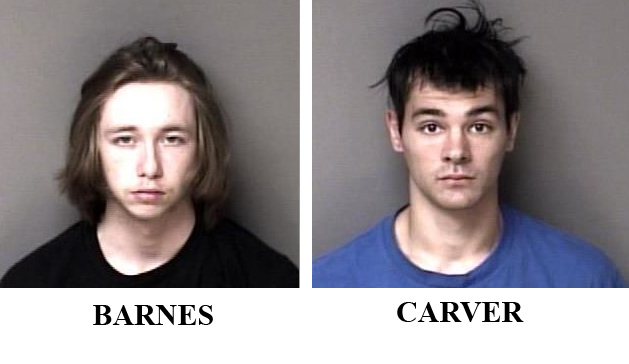 Two Alexander County men have been arrested, as authorities believe the men killed two men and injured a third person over the weekend.

On February 18, 2021, at 11:45 p.m., the Gaston County Police 911 Center received a report of a shooting at Lowery Wood Road and Lewis Farm Road. Upon arrival, officers found two deceased men, Robert Lucas (Luke) Gibby, age 22, and Adam Kale Wood, age 19, near the intersection, according to a press release from the department.

Both suspects are currently incarcerated in the Gaston County Jail, on a hold pending a first appearance in Gaston County District Court.

The third suspect is a juvenile. They have been charged on juvenile petitions and arrested for 2 counts of first degree murder and 1 count of attempted 1st degree murder. The juvenile’s information cannot be released at this time.

On February 22, 2021, around 12:22 am, Wilkesboro Police Dept. assisted Alexander County Sheriff’s deputies in locating Barnes. Officers located Mr. Barnes at the Quality Inn at 1206 River Street and he was taken into custody without incident in the parking lot. Barnes was accompanied by a juvenile female.

This is an on-going investigation.