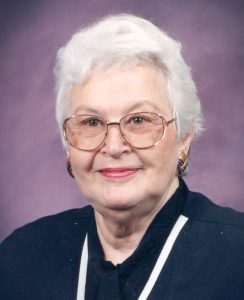 Millie Rebecca Hewitt Schrum, 89, of Taylorsville, passed away Tuesday, February 23, 2021 at Abernethy Laurels in Newton after a lengthy decline.

Millie was born in Newton on July 10th, 1931 as the first born to Ben Gentry and Lottie Eller Hewitt of Newton. Millie was preceded in death by her parents, a brother, Ben Hewitt, Jr., and the love of her life, Dr. E. Max Schrum.

Millie grew up in Newton and graduated from Newton Conover High School in 1948. She then attended Clevenger’s Business College in Newton. In 1950, she married Dr. Max Schrum, and soon after, moved to Taylorsville, where he was already practicing optometry; and by 1953, she had three children in diapers–Max, David and Martha. Their fourth child, Harry, was born in 1961.

She spent her adult life striving to be the best mother she could be by always putting her children above herself. She gave her children their personal constitutions and taught them to be independent and self-sufficient. She loved taking care of others–especially Max, Sr. as he suffered health issues in his latter years. She was thought of as a second mom to many of her childrens’ friends.

She was also a loving grandmother and great-grandmother. She loved to plan large family social gatherings and, until her latter years, could single-handedly prepare and serve a feast for 20 or more people. Her home would transform into a place of boisterous family gatherings where laughs, joy, and talents were shared and celebrated.

Millie always lived by Christian principles. She grew up as a Methodist, but she and Max Sr. chose to become Baptist after moving to Taylorsville. She was very active in the First Baptist Church and loved her Sunday school class there–especially in her latter years when she lived alone. Max Sr. passed away in 2007, and subsequently, she became engaged again, but her fiancé passed away before they were wed.

A graveside service and interment for Millie Hewitt Schrum will be held at Taylorsville City Cemetery on Saturday, February 27, at 1 o’clock, officiated by Rev. Dan Redding. Family and friends may come by Adams Funeral Home on Friday, February 26, 2021, between 10 a.m. until 5 p.m., and sign the register book and get a memorial folder.

Please apply all Covid-19 guidelines to all services.

In lieu of flowers, memorials may be made to: Taylorsville First Baptist Church, PO Box 305, Taylorsville, NC 28681.

Adams Funeral Home and Cremation Services is honored to be serving the family of Millie Rebecca Hewitt Schrum.