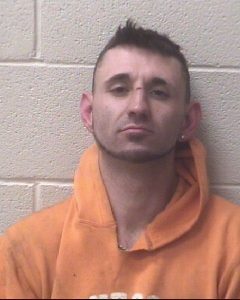 A Conover man was caught for breaking and entering a local business after the investigating officers found his cellphone and other items left at the scene of the crime.

On Tuesday, March 16, about 7 a.m., Taylorsville Police officers and Alexander County Sheriff’s officers responded to Hildebran Accounting on West Main Ave. in response to an alarm call. The rear door had been kicked in.

Finding no one inside, they noticed items at the scene including a black Samsung cellphone, tire iron, two screwdrivers, nail file, and other objects. By going to the residence of a person who had attempted to call the phone, police were able to find out who owned the phone.

Officers arrested Tyler James Angel, age 25 of Conover, who confessed that he had broken into Hildebran Accounting and he also admitted to breaking into the old Alexander County Hospital and stealing copper wire.

Angel is facing charges of Breaking and Entering and Damage to Real Property.