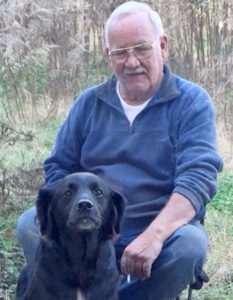 On March 18, 2021, at 9:40 p.m., Hayden Bentley completed his journey here on this earth to find his Joy. We have no doubt that it was a most joyous reunion.

Hayden was born September 12, 1948 to Fred and Rose Ann Bentley. He was the youngest, often referred to as “the baby,” of five siblings.

Hayden and Joy were childhood sweethearts who married on September 29, 1967. Together they built a family, a home, and successful careers.

Prior to his career in Law Enforcement, Hayden worked for Clayton Marcus. Hayden started his career in Law Enforcement in 1976 as a Road Deputy, went on to be the first official Detective, was elected to his first term as Sheriff of Alexander County in 2002, and continued as Sheriff until his retirement in 2009. It was one of the greatest honors of his life to have served the people of Alexander County.

Hayden served on many boards and committees throughout his life, taught BLET, and was a long-time member of the Ruritan Club. He was a member of Bethlehem Baptist Church and in his younger days, he and Joy served as youth leaders. He was an avid Atlanta Braves fan, enjoyed fishing with his buddies, wood working, and working outdoors.

By far his greatest joy was his three granddaughters, Chrisi, Anna, and Emma Joy; and two great-grandchildren, Nola and Barrett. He would happily tell you that being their Bapa was the best job he ever had. According to him, they were not spoiled … they were just “loved a lot”.

The body will lie-in-state from Noon until 5 p.m., Saturday, March 20, 2021 in the Adams Funeral Home Chapel. The funeral service will be at 4 p.m., Sunday, March 21, 2021 at Bethlehem Baptist Church Cemetery. Speaker Seth Chapman will officiate.

Adams Funeral Home and Cremation Services is honored to be serving the family of Hayden Bentley.