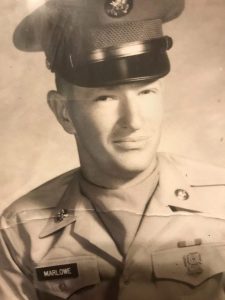 J. Lee Marlowe, 74, of Conover, passed away Friday, March 26, 2021 at Brian Center of Hickory after an extended illness.

Lee was born Saturday, December 27, 1947, in Iredell County, to the late Lawrence Marlowe and Icie Baity Marlowe. Lee was in the US Army, serving two tours in the Vietnam War, and was the recipient of two Purple Hearts. He was a member Bethel Baptist Church.

In addition to his parents, he was preceded in death by a son, Eric Marlowe, and a brother, Hugh Marlowe.

Lee is survived by a significant other, Teree Hull of the home; a daughter, Angel Whitener and husband Walter of Mooresville; step-daughter, Tara Graham and husband Jeremy of Hickory; a brother, Charles Marlowe and wife Joyce of Hiddenite; granddaughter, Hayleigh Seitz; two step-grandchildren, Austin Pickard and Gilliam Graham; and a number of nieces and nephews.

Chapman Funeral Home is honored to be serving the family of J. Lee Marlowe.