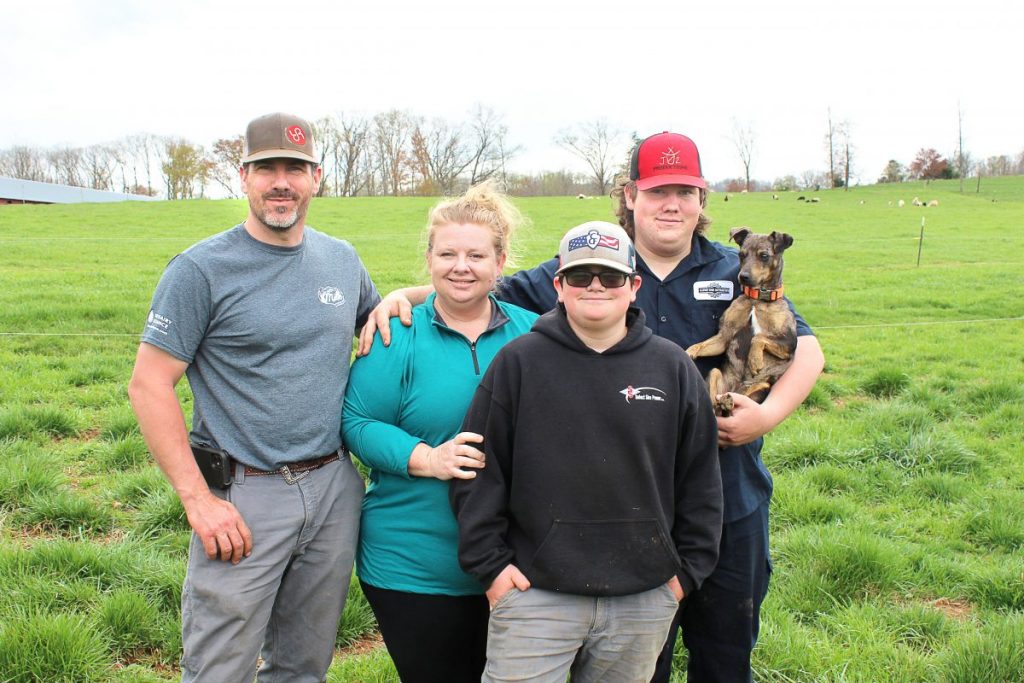 AGRICULTURE: IT’S ALL IN THE FAMILY — Fudd, Allison, Weston, and Garrett Brown are shown on the family farm in Hiddenite. Garrett is holding their dog Dierks, a Mountain Feist.

Disclaimer: I’ve decided to use a first person view, which I don’t normally do, because of the nature of this story.

The month of March is Women’s History Month and Agricultural Month.

When I sought after a story that would fulfill the Women’s History Month approach, I didn’t know I would also be taking on an agricultural one, too.

When I typed in the address for Red Rocks Farm, I was surprised at how far away it was from my house in Bethlehem. Mind you, I need to use my GPS to get just about anywhere in Alexander County. I’m more familiar with Hickory.

The drive out between Hiddenite and Love Valley was breathtaking. People were sitting outside on their front porch or cleaning out their garden beds for the newly coming spring season.

Red Rocks Farm is owned by Allison Brown and her husband, known as “Fudd” Brown. Allison works as the County Extension Director for Alexander County and Fudd works as a manager at Mountaire Farms.

As I drove up the steep driveway to the Brown home, I was greeted by two charming dogs, Ellie and Della. Della and I became pals during my visit at the farm. She dropped her red Kong frisbee at my feet, insistent on me tossing it to her.

Allison, the daughter of a farmer, grew up in Hiddenite. A large portion of her childhood memories include working on the farm. She said it wasn’t until her last year of high school that she took an agricultural class.

It wasn’t long until an interest became a lifestyle for her. Allison had found her niche.

The only college she applied to was NC State University, where she graduated with a Bachelor of Science in Agricultural and Extension Education and a minor in Animal Science.

Allison also met her husband at NC State. He was studying at the Agricultural Institute at the time and was also from Alexander County.

“At the time, it never really entered my mind to go anywhere but back home,” Allison said. “Our family is so tight-knit and I knew this is where I wanted to be.”

Before becoming the County Extension Director, Allison worked as the Livestock and Row Crops Agricultural Extension Agent for Alexander County.

Someone told me a few weeks ago while I was complaining about being busy, “Just wait until you have kids!”

In Allison’s case it would be, “Just wait until you have two teenagers, 161 cows, 200+ acres, 20,000 chickens, two donkeys, three dogs, four horses and over 80 sheep.” (Please know that it is very possible that I am missing something in that list.)

When I asked Allison how many employees she had on her farm, she looked at me with a strange expression and said, “Employees? It’s just the four of us!” 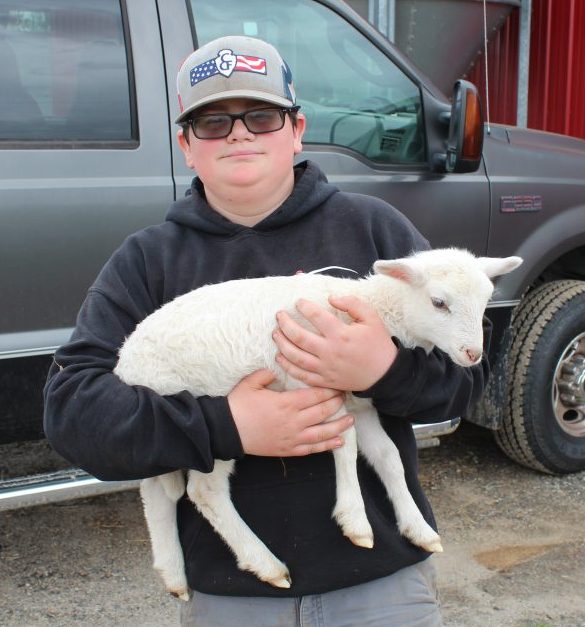 Despite all the animals running around, Red Rocks Farm mostly manages as a grass-fed beef farm. More specifically, they are a cow-calf operation.

A cow-calf operation is a method of raising beef cattle in which the farmer owns a permanent herd of cattle and then sells the calves to then be raised and processed later on by a different farmer.

Allison said most of her cattle are all born within a 60 day period and then weaned from the mother around the same time. She and her husband practice “fenceline weaning” which reduces stress on both the calves and mothers.

The story behind Red Rocks Farm wasn’t as simple as I may have unintentionally created it to sound like.

When Allison and Fudd got married, they lived in a single-wide trailer for a few years.

Once they bought the acreage they now live on, they only started with 50 acres and a double-wide trailer.

Both Allison and Fudd stressed how much work, time, and money went into creating the farm and gorgeous home they have now. Not only does the Brown family manage the farm, but Allison and Fudd both have full time jobs and their kids are still in school. 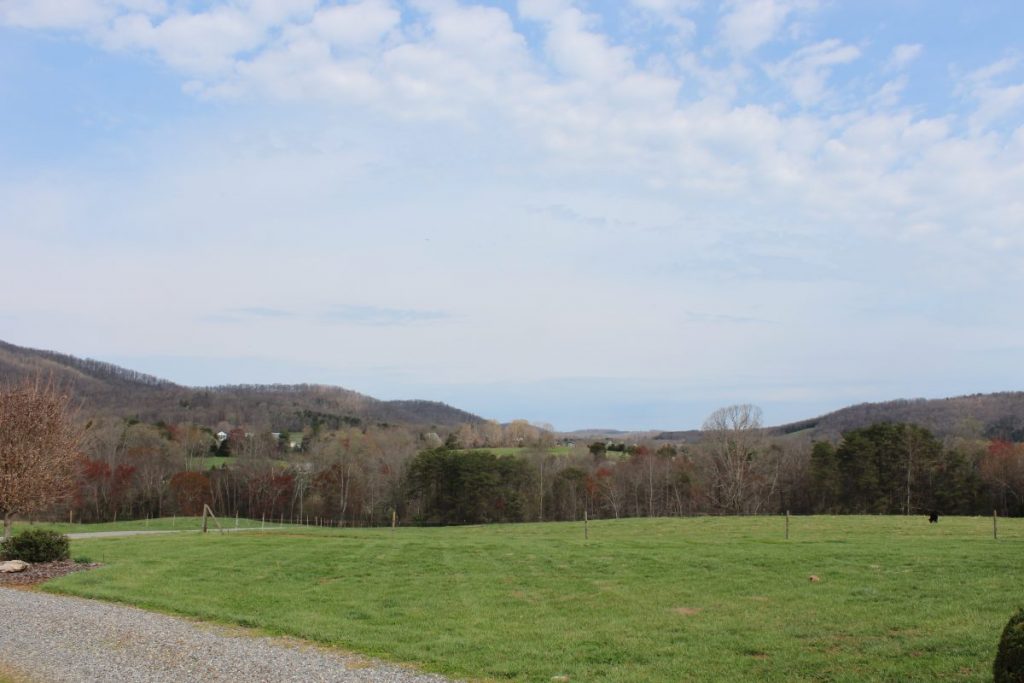 The luxuries of taking regular vacations and sleeping in on the weekends that may come with the average 9 a.m. to 5 p.m. job doesn’t apply to their life.

“When people think of factory farms, this isn’t the same,” Allison said. “This is a family farm. It’s a huge investment for us.”

The single chicken house they own is home to 20,000 chickens and cost more than $300,000 to construct, according to Allison.

Oftentimes, people forget where their food truly comes from. It’s so easy to walk into a Food Lion, pick up some ground beef, and completely forget what all went into producing a small package of meat.

When I buy a package of meat, I’m not thinking about the 13 and 17-year-old kids, like Weston and Garrett, who are waking up at 5:00 a.m. to help feed the chickens or bale hay for the cattle.

“I know the value in what I have and what I don’t have,” Weston said. “I’ve learned more life skills by being on this farm than not.”

Both Fudd and his two sons are into cattle roping. Fudd even won a Ford F-250 in 1996 while team cattle roping in Florida. Not to mention, all three of them have the softest of hearts for their dogs.

Their newest edition, Dierks, is a Mountain Feist. Before I could meet him, he had run off into the woods to bark at what Garrett described as an “imaginary squirrel.” His breed name seems to fit the bill.

It’s hard to describe how special the Brown family truly is. Their work ethic, family dynamics, and love for their animals is unlike many others. 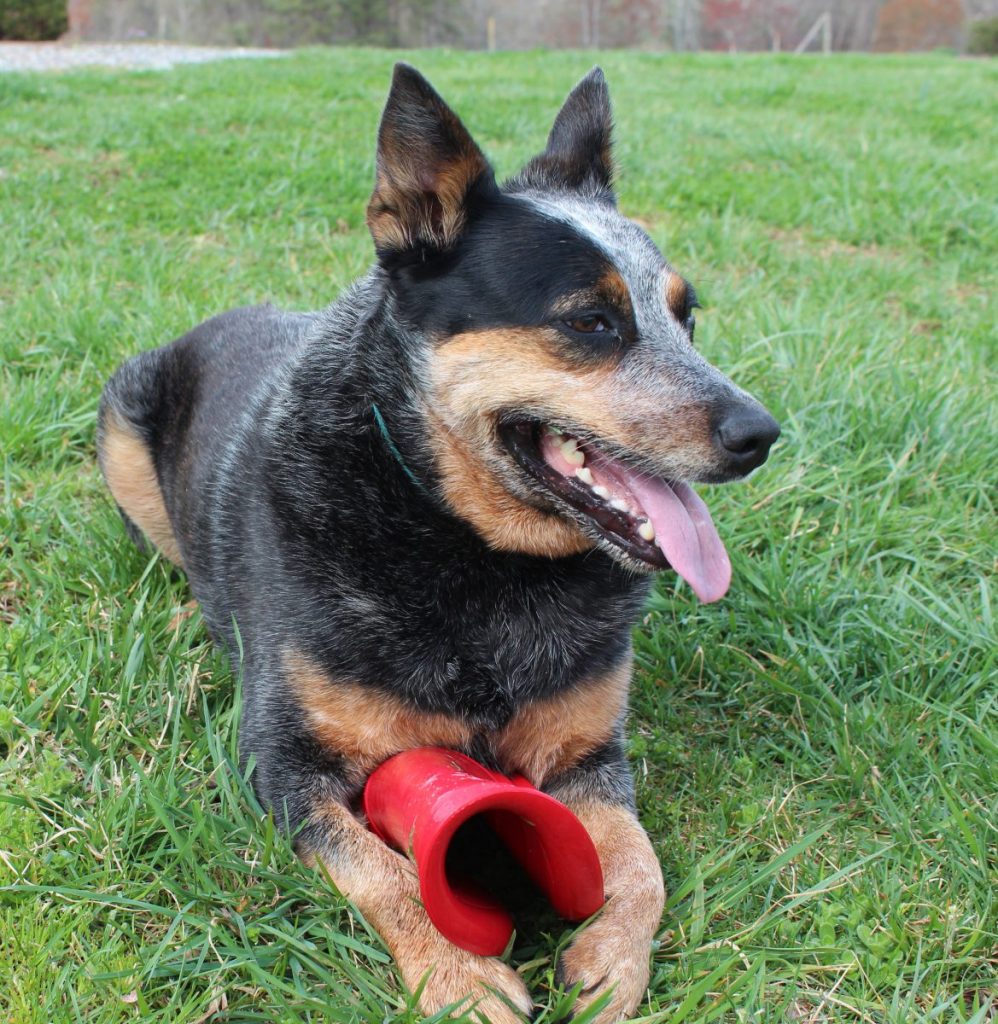 DOWN ON THE FARM — Della, the cattle dog, is shown with her favorite toy, a red frisbee.

I went to visit for a few pictures and to see the sights, but I left their farm with a better understanding of not only how hard small, family farms have to work for what they have, but also how passionate farmers are about what they do.

Fudd described knowing when to rotate the cows from field to field as a sense of knowing rather than there being a clear cut scientific way of telling. Yet, the statement seemed like a larger metaphor for the whole operation.

May we all remember where our food comes from and the people behind it. 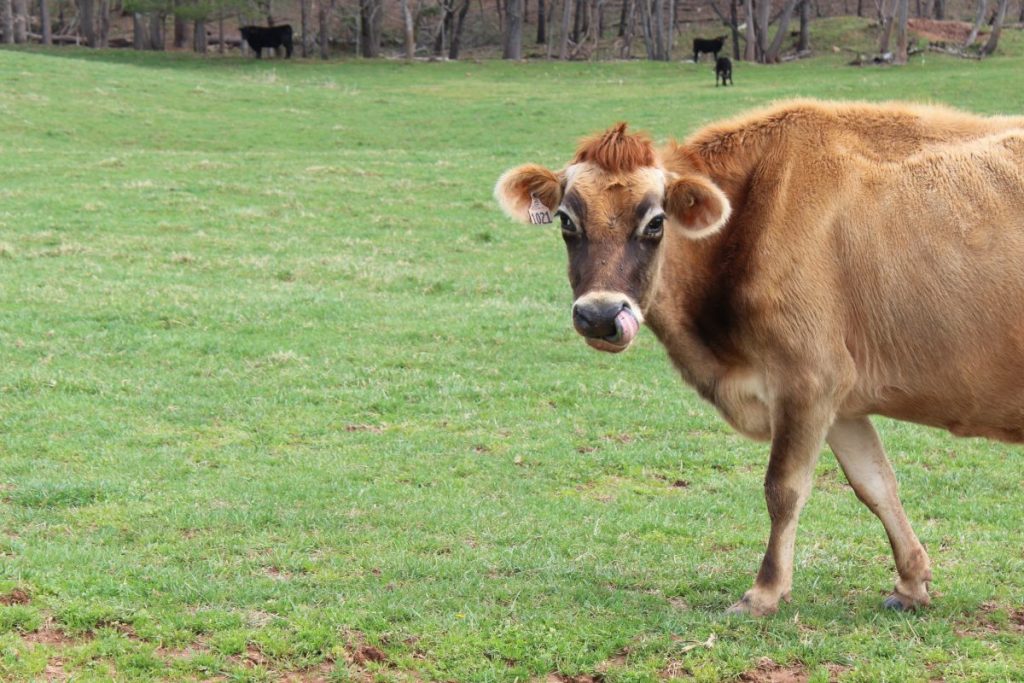 BESSIE — Bessie, the milk cow, came to Red Rocks Farm after some twin beef calves were born and were in need of extra milk.