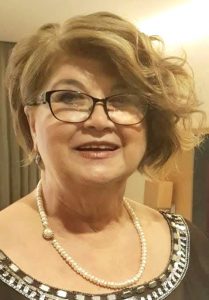 Mrs. Muazzez Tukel, longtime Taylorsville resident and wife of the late Dr. Resat Tukel, passed away peacefully in her sleep on Monday, March 22, 2021 in Izmir, Turkey. She was 74.

Born January 2, 1947, in Denizli, Turkey, she was the youngest of five children.

After graduating from the Sanat School for Girls, Mrs. Tukel was introduced to Dr. Tukel. They married three months later on May 22, 1966. Shortly after the birth of their two sons, Ufuk and Timur, the family immigrated from Turkey to Charleston Heights, West Virginia.

The small coal mining town was a far cry from the America Mrs. Tukel had seen in movies. She spoke no English and had few friends. She struggled at first. That all changed when Dr. Tukel opened a medical practice in Taylorsville in 1971. The community welcomed the family with open arms. Mrs. Tukel gave birth to their third son, Onur, the following year.

Mrs. Tukel worked for 23 years as a staff member at the Alexander Central High School cafeteria and provided transportation to and from school for students in need of assistance. She retired from the school system in 2003.

She was well connected to the Turkish community in North Carolina. Over the years, she participated in festivals and threw lively dinner parties for Turks from all over the state. This kept the spirit of her homeland alive in her heart and in her home.

In 2004, Mayor Guy Barringer honored both Mrs. Tukel and Dr. Tukel with the Taylorsville “Mayoral Proclamation of Appreciation” for their acts of kindness and compassion they demonstrated for many school children and medical patients.

After retirement, the Tukels moved to Charlotte to be closer to family. They split their time between their homes in Charlotte and Turkey. Mrs. Tukel returned to Taylorsville often to visit friends.

Oldest son Uf Tukel writes, “When Mom came to Taylorsville, she was in her early 20’s, still learning English, and trying to raise three rambunctious sons without the help of her family in Turkey. She was forever grateful for the help, support, love and friendship from the Taylorsville community.”

Mrs. Tukel was a fun-loving wife, mother, grandmother and aunt. She lit up a room with her big smile and was often described as one of the happiest people you would ever meet. There was nothing she cherished more than her family.

Mrs. Tukel loved entertaining, cooking large Turkish meals, and having friends for tea. She enjoyed laughing, music, dancing, and spending hours video-chatting with family and friends. She found television to be a welcome distraction and had a diverse range of tastes including games shows, sitcoms, and Turkish soap operas. She was quite fond of Julia Roberts and American football. Go Dolphins!

She had an adventurous spirit and traveled extensively. She organized tours to Turkey, spent family vacations in Myrtle Beach and embarked on multiple cruises to the Caribbean, Alaska and Hawaii. She also loved road tripping to Florida to visit her grandkids. But her favorite place to visit was Çeşme, where she enjoyed watching the sunset over the Aegean Sea from her front porch.

She was predeceased by Dr. Suleyman Resat Tukel, her husband of 47 years; her parents, Ahmet and Emine Tomas; and her brothers, Sevket Tomas, Lutfe Tomasoglu, and Esmile Tomas.

Mrs. Tukel was laid to rest with her husband in a cemetery near their home in Izmir. Her son, Timur, and several friends and family members attended the ceremony.