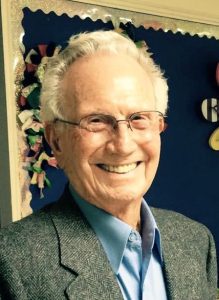 Born February 6, 1925, in the Banoak Community, he was the son of the late William Lafayette (Fate) Huffman and Jettie Speagle Huffman.

In addition to his parents, he was preceded in death by his brother, Roy Huffman, Sr and his sister Grace Mull Howlett.

He graduated from Banoak High School, in the community of Banoak, and then entered the US Navy, serving as Seaman Second Class on the USS Nashville during World World II from 1942-1944. After his honorable discharge, he returned to Banoak and started work at Hickory Manufacturing Company, where he started off sweeping the shop floors and worked his way up to plant manager. He retired after 45 years with Hickory Manufacturing Company.

He was a member of Bethlehem Baptist Church. He was affectionately known as “Red” for his fire engine red hair. He loved water skiing, boating, gardening, and golf. He always had a smile on his face, and always provided a helping hand to anyone in need.
Receiving and funeral service will be held at Bethlehem Baptist Church, 7500 NC-127, Taylorsville, NC 28681, on Saturday, April 10. Receiving will start at 1:00 p.m., with the funeral service at 2:00 p.m. Burial will follow with military honors at Woodlawn Memorial Gardens, 3120 Falling Creek Rd, Hickory.

Bass-Smith Funeral Home in Hickory is serving the Huffman Family and online condolences may be left for the family at www.bass-smithfuneralhome.com.