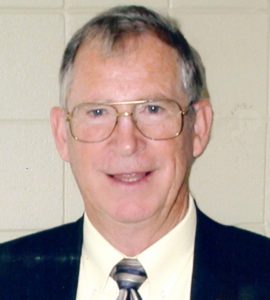 Carl was born October 9, 1930, in Alexander County, to the late Theodore and Lelia Teague Wagner.

He was preceded in death by his wife, Lucy Page Wagner; two sisters, Emilyn Wagner and Rachel Wagner; and a brother, Frank Wagner.

Carl attended North Carolina State University, where he received both a Bachelor’s and Master’s degree. He served in the ROTC in college and joined the military after graduation. He served one term in the Army and was stationed in Japan.

Upon discharge from the Army, Carl came back to North Carolina and moved to Hudson, in 1955, and began teaching agriculture at Hudson High School. He proudly served as a teacher for over 35 years, teaching multiple generations of young men in southern Caldwell County, both at Hudson and South Caldwell High Schools. Late in his career, he served both as an Assistant Principal at South Caldwell and as an Associate Superintendent for Caldwell County Schools, but at heart, he was always a teacher.
Carl was a member of Hudson United Methodist Church, where he was extremely active. Over the years, he served on many committees and held many prominent leadership positions. He served many years as a Sunday School teacher. He also served as Scout Master for the Boy Scout Troop 269.

Early on, Carl became involved with the Hudson Lion’s Club and served in multiple leadership roles, both in the local chapter and at the district level.

Carl and Lucy loved to travel and literally traveled around the world. Many of their trips were for pleasure, but he took several mission trips, both for the church and for the Lion’s Club.

During his life, Carl received many accolades. He was an early recipient of the Hudson Man of the Year award, the 2007 LA Dysart Outstanding Citizenship, and, in 2017, he was awarded the prestigious Order of the Long Leaf Pine.

Carl loved being involved in all things Hudson. He served multiple years on the Town Council and was Mayor Pro Tem. He worked tirelessly to help establish the recreation department and was actively involved in establishing the Hickman Windmill Park and the Depot Museum. Carl was involved with the Town as they took over the old Hudson Elementary School and converted it to the Hudson Uptown Building that we all know today.

The funeral service for Carl Wagner will be Friday, May 7, 2021, at the Hudson Uptown Building. Receiving will be from 12:30 until 2:00 p.m., with the funeral following at 2:00 p.m. The family requests that all attendees wear a face mask and practice social distancing, where possible.

Memorials can be made to Hudson United Methodist Church, 383 Main Street, Hudson, NC.

Online condolences may be sent to www.evansfuneralservice.com.