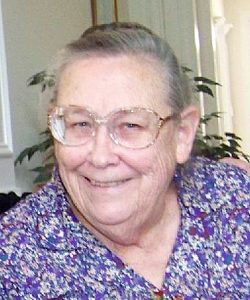 Colene Klevay Goodwin Philmon, 84, of Hiddenite, went to be with her Lord and Savior on Friday, May 7, 2021, at her home.

She was born July 27, 1936, in Rockbridge County, Virginia, the daughter of the late Earl Bryan and Flora Evelyn Roach Goodwin.

Colene was a member of Faith Revival Crusades and Missions Church, where she served as the treasurer for 40 plus years. She was a tax preparer for 50 plus years, held various offices in different community functions throughout Alexander County, such as Ancestry Club, Rocky Springs Homemakers Club, Vashti Volunteer Fire Department, and VFD Ladies Auxiliary.

She, along with her family, was known for the homemade ice cream they made for 30 plus years at the annual Vashti Day. She was known for her homemade dill pickles. She also enjoyed oil painting pictures for her family and friends.

In addition to her parents, she was preceded in death by her husband of 67 years as of October 15, 2020, Thomas Alva Philmon, Sr.; a son, Thomas Philmon, Jr.; a grandson, Christopher Payne; two sisters, Carletta Reid and Flora Earlene Goodwin; an infant brother, Earl Bryan Goodwin, Jr.; and infant sister, Cora Katherine Goodwin.

Her family would like to thank the following special caregivers, Sammi Jo Johnson, Jesse Jo and Ryan Anderson, Sabrina Weikle, and Denise Rhodes for their love and care of our sweet loved one.

The funeral service will be held at 4 p.m., Wednesday, May 12, 2021, at Adams Funeral Home Chapel. Rev. Michael Carr and Rev. James Safrit will officiate. A private graveside service will follow the service. The family will receive friends from 2:30-4 p.m. prior to the service.

Memorials may be made to Hospice and Palliative Care of Iredell County, 2347 Simonton Road, Statesville, NC 28625.