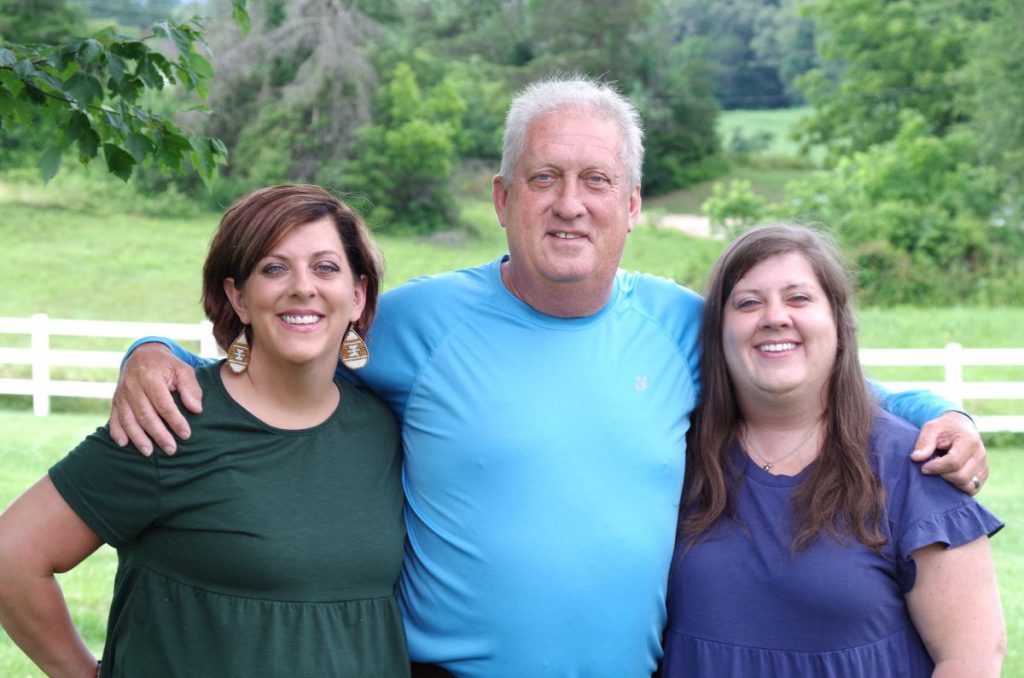 WITH HIS GIRLS — Mr. Robin Harris, above, was named The Taylorsville Times’ 2021 Father of the Year this week after his daughter Harley Harris Mabry wrote the winning essay in the annual contest. Robin is shown above with his daughters Danielle (left) and Harley (right).

This Father’s Day, many local residents are thankful for their fathers, and that is especially true for the family of Mr. Robin Harris, of Taylorsville.

His daughter Harley Harris Mabry, also of Taylorsville, who wrote the winning essay in The Times’ 2021 Father of the Year Essay Contest, sat down to explain the special relationship that she and her sister, Danielle, have with their dad. (Harley’s essay appears below.)

A well-known local racecar driver and mechanic, Robin has made a name for himself in the automotive field and also for helping others.

But last December, as he prepared for a routine surgery, little did the family know that their father’s strong, capable hands would soon need the help of Harley, Danielle, and Robin’s wife, Jamie.

“I went in to Iredell Memorial Hospital for prostate surgery December 19 and had a widowmaker heart attack while I was in the hospital,” Robin recalled. “Because of COVID precautions, I could not transfer to Baptist for four days for heart surgery.”

Both hospitals gave Robin excellent care, he noted, and he said he is thankful for the great amount of support he received from his family.

“If you would have been anywhere else in the world than where you were when your heart attack occurred, you would not be here today,” one doctor told Robin.

Being sedated twice in four days for surgeries took a while to recover from mentally, Robin said. And then the physical stress of being operated on and needing to heal left Robin relying on his children and wife for weeks.

“If it wasn’t for my complete family taking care of me, I couldn’t have done it,” Robin recalled. “I couldn’t drive for four weeks, it was five weeks before I was allowed to work, and I had three months of physical therapy after surgery.”

But the strength of their father, instilled in their own characters through the years, has helped Harley and Danielle jump in and be able to help their dad to recover.

“I think sometimes God prepares you for things. My wife, Jamie, was diagnosed with Stage 4 colon cancer a couple years ago. Doctors told her she isn’t supposed to have survived. Doctors told me I shouldn’t have survived. This house could be empty today. But we’re here.”

A big part of the Harris family heritage in intertwined with cars — going back to their grandfather, Robin’s dad, Glenn Harris. Glenn was a local mechanic and liked to race go-karts at Pine Valley Speedway in Taylorsville and other area tracks.

“I was a kid and I wanted to race. He told me he would let me race if I could beat him. Well, that wasn’t very hard because he wasn’t that fast.”

Tragically, Glenn died of cancer when Robin was just 25 years of age. At that point, Robin had seven or eight years of experience as a mechanic and hated to let the experience go to waste, so he continued on in the profession.

During this time, Robin progressed from go-karts to dirt track cars to asphalt tracks. He would go on to drive in more than 800 career races during his 26-year racing journey and was inducted in the Alexander County Sports Hall of Fame in 2015.

A 2015 article in The Times noted that, “During a decorated short-track racing career, Harris appeared in 871 races, posting 355 wins and 171 career poles. He placed in the top-five in 739 of his 871 career starts. Harris earned 10 dirt track championships and three paved track titles in his racing career. He posted track titles in the three major divisions at Hickory Motor Speedway, winning the 1997 Limited Sportsman, 2000 Limited Late Model, and 2005 NASCAR Late Model Super Truck championships. A 1978 graduate of Alexander Central High School, he won four go-kart track championships at local tracks from 1981-1985.”

Robin’s life was a mixture of working on cars, going racing, and raising two girls. Both Harley and Danielle agree that, despite his burly, tough exterior, their dad became a mom as well as their father, when he became a single parent during the girls’ teenage years.

Both young ladies recall the moments their father helped be their fashion advisor, relationship coach, cook, chauffeur, and just being their pal. Going out to eat was sometimes a destination in itself and then there were the infamous 2 a.m. trips to Wal-Mart because no one could sleep!

About cars — the apple doesn’t fall far from the tree. Harley said that as a young girl, she could tell people more about their vehicles than what was the latest fashion. And Harley’s son, Harrison, age 2, loves cars and trucks, too. The family even commissioned a matching miniature uniform for Harrison, made by the company that made Robin’s last Cheerwine-sponsored racing uniform. Grandfather Robin and his grandson were able to pose for pictures at Hickory Motor Speedway recently.

As useful as the automotive knowledge is, Harley said the main take-away from her dad is that “he always wants to do more for people than he knows they can do for him, out of the kindness of his heart.”

“My philosophy is, if you’re good to people, they will be good to you,” Robin said.

Harley’s sister agrees. “I know how much love he has, I can see how good he is to my young’un. He never misses a dance recital. If she stays with him, she gets to ride along to the parts shop and they go out and eat somewhere,” Danielle said. “I work from home and it’s been great for Peyton to spend time outside with him.”

And Robin’s love extends as well to Jamie’s daughter, Kendra Myers, and her sons, Gavin, 10, and Alex, 5.

“He became a single parent when I was in middle school. I felt like he wanted me and he always made me feel like I was never an option,” Harley recalled. “At the time, it was an adult with two kids, learning how to take care of the house. We all sort of grew up together.”

“He truly is my best friend. When I went off to college at Wingate, he didn’t know how to text. But by the end of one day, he had learned how to text me. We stayed in touch every day. And I still text him every day to let him know I get to work OK,” Harley said. “I don’t take that for granted.”

Yes, this Father’s Day, Harley is very thankful for her dad, her best friend, her hero, one whom she can talk to every day. He’s always in First Place.

Winning Father of the Year Essay

“My Daddie. My Hero. My Christmas Miracle.”

Christmas lights glisten. Christmas music plays. Christmas plays are performed. These are normal events occurring mid-to-late December. However, December 18th held a different itinerary for our family. My daddie, my hero, goes in for a routine surgery. We talked and prayed as he walked into the office to check-in.

The phone rings. Surgery was a success. 15 minutes pass. Phone rings again. My sister was on the line. I answer, fully expecting “Did you hear all is well?” I was wrong. “A cardiac event has happened. He will be going in for a heart cath.” At that moment, my world stopped. “Danielle, we cannot lose him.”

Over the next five days, God’s plan unfolds. Memories were flooding my mind.

Growing up, the hands that held me, that could heal any scrape, that could fix any broken heart were full of deep scars, stained with grease, rugged yet soft, compassionate yet full of expectation. He made balancing owning a business, racing on the weekends, and being the best parent ever look easy. Homework was always complete; grades had to be the best that we could do. Sometimes, they just had some additional grease as an added bonus from late night racecar alterations.

When he became a single parent of a middle school girl, we learned and developed together. We essentially grew up together. We learned how to wash clothes. White pants came out slightly tie-dyed because they were paired with a bright pink shirt. What should you wear to a middle school dance? What accessories should be worn with that dress to church? What was going to be for lunch the next day? There were many nights we would go to Wal-Mart at 2 a.m. We would leave, rarely with any purchases in our arms, but with memories and bellies hurting from laughter.

Out of all the outfits he helped me pick out, I remember the day I needed advice deciding on the dress I would wear down the aisle. As I walked into the garage to pick him up that day, he looked at the employees and said, “Alright, boys, I got to go get a wedding dress. See you tomorrow.” The moment I saw his face, I knew I had found the dress when his eyes held puddles of tears. The nurture and care during childhood, the life lessons and morals instilled as a teenager, established high expectations for who I married in life.

My dad is the best of the best. As we grew close together, we also grew closer to the Lord. Church became our place of comfort, place of hope, place of joy. We would go to Bojangle’s together before Sunday School each Sunday.

The memories kept overflowing over those five days as we waited for his bed at Baptist. “If you would have been anywhere else in the world than where you were when your heart attack occurred, you would not be here today,” stated one of the doctors. The Lord was merciful to allow my dad to remain here on earth to create more memories while serving our Savior. Robin Harris truly is my daddie, my hero, and now, my Christmas miracle.