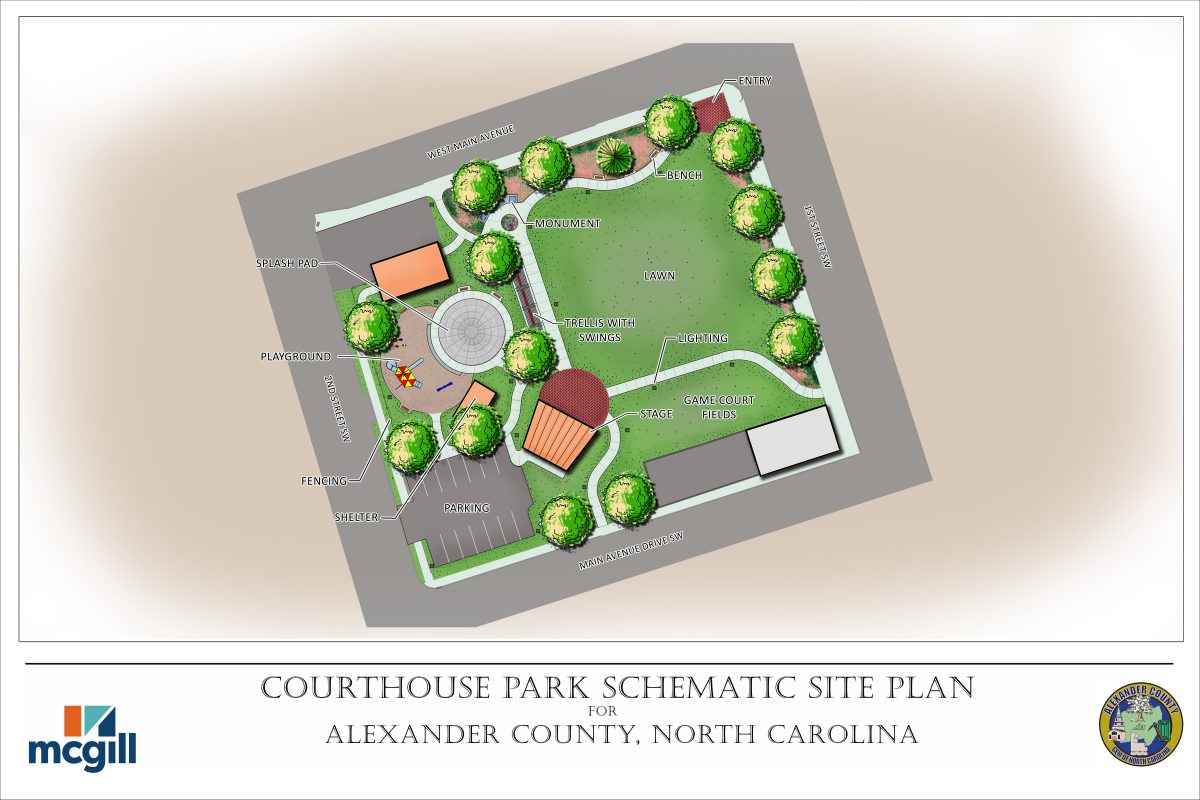 The Alexander County Board of Commissioners approved the addition of a splash pad, playground equipment, picnic shelter, and fencing to the Courthouse Park project at the June 21st meeting, according to a press release. (Location of amenities may differ slightly from engineer’s rendering map.)

“In the last few weeks, we’ve heard the community talking about their desire to have a splash pad at the new park. Commissioners are all in agreement that this should happen,” said Larry Yoder, Commission Chairman. “We’re excited and thrilled that we can make this happen. It will be an exciting time for the children of Alexander County.”

The new additions, which are estimated to cost $398,640, will be constructed along with the current project which consists of grading, site work, landscaping, sidewalks, and a performance stage. Total estimated cost for the park project is $1,008,200. In addition, the Taylorsville Rotary Club has raised $63,276 to assist with construction of the stage as well as $4,000 for stage design.
Commissioner Marty Pennell echoed Chairman Yoder’s comments. “Commissioners have heard the voices of folks in our community,” Pennell said. “Hopefully we will see a lot of families enjoying this for years to come.”

County Manager Rick French said the splash pad will be very similar to the one in Valdese.

Commission Vice-Chairman Ronnie Reese said, “As long as we can stay focused on staying within our budget, there is some room for doing things. The public is going to see that we hear them and want to do things that are good for the county. It will be a good addition to our park.”

Alexander County Courthouse Park is slated for completion by the end of November 2021. The county park is located at 131 West Main Avenue in downtown Taylorsville.

• County Manager French presented information about a new wildlife trail at Wittenburg Access Area. Commissioners approved the low bid of $61,153.68 from YRU Contracting Inc. to construct the one-mile trail. It was noted that the company, which is located in Idaho, built the trails at Rocky Face Mountain Recreational Area.

• Commissioners held a public hearing for the close-out of the 2017 Community Development Block Grant Infrastructure project which provided wastewater service to Stony Point Elementary School. County Manager French said the project provided a new pump station and generator, 2,180 linear feet of force main sewer lines, and approximately 820 linear feet of gravity sewer lines to serve the school, benefiting 65.9 percent low- to moderate-income individuals. The project also included the abandonment of two septic tanks at the school. The total cost for the project was $741,863.25, with Alexander County Government providing $78,243.93 of that amount for administrative expenses. The original grant totaled $894,750; therefore, the remaining $152,886.75 will be returned to the state.

• Commissioners held a public hearing on a conditional use permit application submitted by Daniel and Beth Serusa. Bill Rogers, Chief Code Enforcement Officer, presented information about the application. The applicants would like to start an outdoor artist market on 2.81 acres located at 449 NC Hwy. 16 North. If the permit is approved, the market would have 30 vendor spaces and could operate two days a week. Adjacent land is zoned Highway-Commercial (H-C). Commissioners voted to continue the public hearing at their next meeting so additional questions can be answered.

• Commissioners held a public hearing on a nuisance case for property located at 134 Fire Lane in Stony Point. The case was heard at the May 24th meeting, but was tabled until the June 21st meeting as the property had just changed ownership. Bill Rogers said that staff recently revisited the property but saw almost no evidence of an effort to clean up the area. He said that staff has continued to receive complaints from neighbors. Commissioners voted unanimously to issue an order of abatement for the property. The property owner will now have 20 days to resolve the issues after the documentation is signed.

• In the County Manager’s Report, French said the Alexander Soil & Water Conservation District (SWCD) is requesting that a “special circumstances” approval be granted to utilize FEMA Public Assistance funds for stream debris removal as a result of damages sustained during the flooding on November 11-12, 2020. Approximately 30 sites have been identified for stream debris removal with an estimated cost of $500,000 to $1 million.

French said that Alexander County is part of the North Carolina Memorandum of Agreement for the opioid settlement. The state could receive as much as $850 million over an 18-year period to support state and local efforts to address the opioid epidemic. He hopes to have an attorney from the North Carolina Association of County Commissioners (NCACC) to discuss the issue at the board’s July 19th meeting.

The Alexander County Christmas Parade will return this year on Saturday, December 4, at 3:00 p.m.

The Alexander County Board of Commissioners typically meets on the first Monday of each month at 6:00 p.m. in room #103 at the CVCC Alexander Center for Education; however, the next meeting is set for Monday, July 19 at 6:00 p.m. Regular meetings are recorded, and can be viewed on the county’s Government Channel on Spectrum channel 192 or on the county’s YouTube channel at www.youtube.com/alexandercountync. Meeting agendas, minutes, videos, and more are available on the county’s website at www.alexandercountync.gov/commissioners.