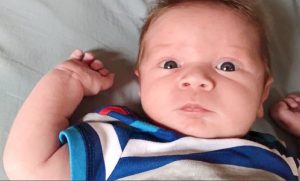 According to various online reports, a Taylorsville couple is hoping and praying for recovery for their two-month-old boy, who was severely injured in a car crash on June 25.

Wesley and Nina Roop, of Taylorsville, were involved in a wreck and their son, Tucker, age two months, was a passenger. The wreck report by North Carolina State Highway Patrol Trooper J.D. Kitchens states the Roop vehicle and three others were headed west on I-40 on June 25 in Davie County. The driver of the car behind the Roop vehicle, Dustin James Davis, of Jacksonville, NC, was charged with failure to reduce speed after his car slammed into the Roop vehicle.

According to the GoFundMe fundraiser page for the family, organized by Rita Eldreth, Wesley Roop has a collapsed lung, broken ribs, and spine fracture. Nina Roop was bruised and extremely sore but was treated and released. However, baby Tucker is fighting for his life.

Tucker is still critical, due to head trauma, which caused some bleeding and swelling, a broken femur and collarbone, said Eldreth in the GoFundMe post. The baby is showing some signs of improvement.

The Roop family is asking for all who will pray, to please pray for their son.