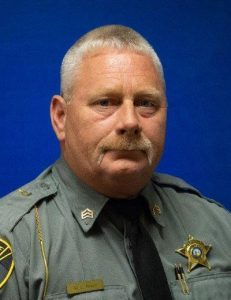 In the aftermath of a fire that claimed his home on June 29, Alexander County Sheriff’s Office Sgt. Mike Bruce, of Hiddenite, is thankful for the community which has rallied around him.

It was a devastating feeling that night. “When you’re told your house is on fire, you run outside and try to put water on it, and soon you realize that you’re losing four generations of stuff that can’t be replaced.”

He noted that, due to quick response by the local fire departments, nearly all of the brick was salvaged from the home and much of the framing.

Perhaps most remarkably, Bruce said that the ashes of his mother and father, and their family Bible, were not harmed. “The paper wasn’t even brown,” he added.

Although the home, built in 1976, is gone, Bruce is looking forward to living there again soon.

“The County will let me build back on the existing foundation,” Bruce related. “The plan is to rebuild.” Members of the Mennonite community have helped immensely in the rebuilding process and now the structure is back under roof.

“There are no words that can truly describe my thankfulness for the outpouring of love and kindness that has been shown to me over the past weeks since losing my home,” said Bruce. “The generosity of so many of you has been tremendous. To each individual, business, church, law enforcement agency, fire department, and so many more, I want to extend my heartfelt thanks for all that you have done in the midst of one of the most difficult times in my life. I was told once that you could measure a man by the number of friends that were seated around his table. I am humbled and honored to call so many of you my friends.”