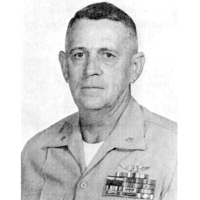 Bill was born on June 18, 1928, in Hiddenite, to Jeff Wingate and Elizabeth Gwaltney. He joined the US Marine Corps, serving during WWII, Korean Conflict, and Vietnam, obtaining the rank of Lieutenant Colonel, and retiring in 1985.

About Bill’s life in his words:

I was born in 1928 in Hiddenite, NC, in 1929, our home burned down, and my mother was left with three children to raise, a new home to build, and a husband confined to a series of hospitals for years to come. To say we were poor is a gross understatement of fact. We did not have a pot to use, nor a window to throw it from.

We had no electricity, no radio, obviously no TV, and as a result, we had to provide our own source of entertainment. We did this by each member learning to play a musical instrument and by singing gospel music in four-part harmony (much like our present barbershop harmony.) We sang in the church choir, at every community get-together, and in the fields as we raised our crops.
I never knew we were poor until I left home and entered the military. We were just in the same boat as most everyone else in our little mountain community.

At age eleven or twelve, three of my friends and I formed a gospel quartet, and we were relatively successful locally for the next five or six years singing at churches, church functions, celebrations, and on the local radio station.

In 1945, Wally Fowler (then a big name in gospel singing) came thru our area, heard our quartet on the radio and contacted us with an offer to take us to Nashville, TN, to sing on the “Grand ‘ole Opry.” We were delighted and accepted readily. Unfortunately (for me) I had volunteered to join the Marine Corps and was awaiting my orders to boot camp, so my cousin took my place as the bass singer in the quartet.

Having enlisted in 1945, I was eligible for WWII benefits and later Korea, both Lebanon incidents, and Vietnam. I retired from the Marine Corps in 1985 and moved to Pensacola with my wife. I had not sung harmony for over 40 years.

One Sunday at church the Fiesta Chorus sang our musical service and “P i-n-n-n-g” the bell went off in my head. “This is what I love and have been missing for the past four decades.” I accepted their invitation to a chapter meeting and have missed very few meetings since.

My biggest regret…that I missed almost half a century of the joy of ringing those gorgeous barbershop chords. My greatest joy…my darling wife Nancy.

In January of 1960, he attended the first Marine Warrant Officer’s Screening Course at Quantico, VA. Subsequently, he was assigned to and graduated from, the Air Intercept Controllers School at Glynco, GA, and was assigned to Marine Air Control Squadron-3 at the Marine Corps Air Facility, Santa Ana, CA.

He served six years at MACS-3 in the research and development program for the Marine Tactical Data System and then joined MACS-4 in 1966 along with the first MTDS equipment accepted by the Marine Corps. After a year of shakedowns, he accompanied the system to Vietnam for its initial combat application.

Upon return from Vietnam, he was assigned to Cherry Point, NC, where he assumed the duties as the Director of the Airborne Operators School.

In May 1972, he was transferred to Naval Air Station, Pensacola, FL, where he was assigned as the Director, Marine Aerial Navigator School. He remained as Director of this school until June of 1975 when he was transferred overseas, where he served as the Operations Officer for MACS-4, Futenma, Okinawa.

Upon his return from overseas, Lt. Col. Gwaltney was assigned to the Command and Staff College at Quantico, VA, until June 1977. He arrived in Denver, CO, in June 1977 and assumed the duties as Commanding Officer, Marine Air Reserve Training Unit, Marine Air Control Squadron-23, Aurora, CO, on August 2, 1977.