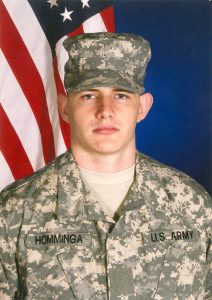 Matthew A. Homminga, 27, of Killeen, Texas, passed away at home surrounded by his family on Tuesday, August 17, 2021.

Matt was born on January 2, 1994, in Craig, Colorado, to Larry Homminga as the first baby of the year in Memorial Regional Health in Craig. Matt grew up in Taylorsville and graduated from Alexander Central High School as part of the class of 2013. He was an avid skateboarder in his younger years.

Matt joined the United States Army in January of 2014 and, while stationed at Fort Hood, he met and married Makayla Renee McTeer on July 11, 2017. Matt served three tours in Kuwait and was stationed in Germany for two and a half years.

While in Germany, they proudly welcomed Amberlee Homminga on August 16, 2019, before he was diagnosed with cancer and came back stateside for treatment. In his spare time, he loved to stream video games on twitch and was developing quite the following. He was also in the C3 Car Club in Killeen, Texas where he would proudly show off his Camero.

Matthew is survived by his wife, Makayla Homminga; daughter, Amberlee Homminga; father, Larry Homminga and wife Laura Cranford; and his in-laws, Troy McTeer and wife Lisa, and Anndra Camp and husband Justin. Matt also leaves behind his many friends from the Army, his gaming, and the car club.