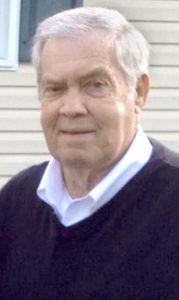 He was born May 31, 1941, to the late Glenn Atwell and Kathleen Marshall Adams. Harold helped start Master Breeder Farms in 1978, which later turned into Mountaire Farms, and overall worked in the poultry business for over 40 years.

Harold also was very involved in his community, serving on the board of directors at Taylorsville Savings Bank, was a volunteer fireman at Hiddenite Fire Department, and was a coach of several sports. He also enjoyed farming, watching the Atlanta Braves, and bird hunting as hobbies.

Along with his parents, he was preceded in death by his spouse of 58 years, Eva Dean Adams; a son, Michael Adams; and a sister, Mary Lynn Alexander.

Those left to cherish the memories of Harold include a son, Chad Adams (Holly); four grandchildren, Gabrielle Ferguson (Tate), Gavin Adams and fiancée Leah Ray, Ian Adams, and Evelyn Adams; along with a number of nieces and nephews.