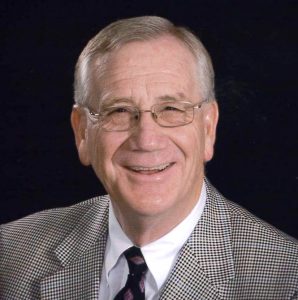 Marvin Richard Byrd, 73, of Bethlehem, passed away peacefully Tuesday, September 28, 2021, at his home.

Born July 28, 1948, in Elkin, Richard Byrd was the son of the late Marvin M. Byrd and Ruby Cockerham Byrd.

In addition to his parents, he was preceded in death by his sister, Becky Byrd Norman, and a nephew, Terry Hutchens.

Anyone who had the pleasure of knowing Richard Byrd knows that he had two priorities throughout his life: his family and his faith. And from the moment he saw Wanda Holcomb on the steps of Wilkes Community College, he knew he wanted to build a family and a life with her. Wanda and Richard were married in 1970, just as he began six years of service to his country in the Marine Corps Reserves. The couple kept a genuine, loving spark ignited in every day of their 51 years of marriage.

Richard lived out his faith as a devoted husband and father, as he and Wanda raised their two children, Ben and Tracy. He was an engaged Dad, coaching Ben’s sports teams and spending quality time with both Ben and Tracy, even in the midst of his busy career.
Richard enjoyed his lifelong work with Certified Laboratories of NCH Corporation, and sincerely loved and appreciated his customers, who he always considered as family. He was engaged in his community, and always made time to support any and all who needed him.

Richard was a Wolfpack fan and an avid woodcarver, whittling away at ducks, dogs, horses, and birds in his free time. He loved playing (at) golf, gardening, horseback riding in the North Carolina Mountains, snow skiing, beach trips, and – most of all – playing with his four grandchildren. Richard and Wanda enjoyed taking his yearly “company” trips that were often extended into personal vacations. Their trip to Italy and Greece was the highlight of his travels and left Richard and Wanda with wonderful memories.

Richard was truly a living example of how to be a faithful servant to the Lord, serving as a deacon, Royal Ambassador Leader, choir member, soup kitchen volunteer, usher, and welcoming committee member during his 47 years of membership at Viewmont Baptist Church. And Richard served cheerfully, always wearing that signature smile, making everyone around him feel welcome and included. Richard’s faith brought him peace in his last days, knowing he would soon be home with the Lord.

Richard was a graduate of East Wilkes High School and N.C. State University. He worked for 48 years for Certified Laboratories of NCH Corporation as Western N.C. Sales Representative.

Those left to cherish his memory are his wife, Wanda Holcomb Byrd; a daughter, Tracy Byrd Mayberry and husband Ryan, and their children, Caroline and Connor of Bethlehem; a son, Ben Richard Byrd and wife Angela, and their children, Ethan and Thomas of Knightdale; two sisters, Ann B. Hutchens of Lewisville, and Marvorene B. Edwards and husband Wayne of Winston-Salem; nieces, Marlina Griewe, Linda Mason, and Jan Richardson; nephews, Byron Edwards, and Todd and Michael Norman.

Online condolences may be sent to www.bass-smithfuneralhome.com.