At a press conference October 1, 2021, Deputy Attorney General Lisa O. Monaco and DEA Administrator Anne Milgram announced a significant law enforcement surge to protect American communities from the flood of fentanyl and fentanyl-laced pills across the United States. Illicit fentanyl, a synthetic opioid found in most of the fake pills that were seized, is the primary driver of the recent increase in U.S. overdose deaths.

“Illicit fentanyl was responsible for nearly three quarters of the more than 93,000 fatal drug overdoses in the United States in 2020,” said Deputy Attorney General Monaco. “The pervasiveness of these illicit drugs, and the fatal overdoses that too often result, are significant threats to public safety and health in this country. The Department will continue to use all of the resources at its disposal to save lives, complementing strong enforcement efforts with public awareness and outreach campaigns, as well.”

“During the past eight weeks, DEA has targeted the criminal drug networks flooding the U.S. with deadly, fentanyl-laced fake pills,” said DEA Administrator Anne Milgram. “DEA remains steadfast in its commitment reduce drug-related violence and overdose deaths by dismantling the violent, criminal drug distribution networks across the United States. The fentanyl-laced fake pills seized by DEA could potentially kill more than 700,000 Americans. I urge the American public today to talk to their loved ones about the threats and dangers of fake pills and the simple fact that one pill can kill.” 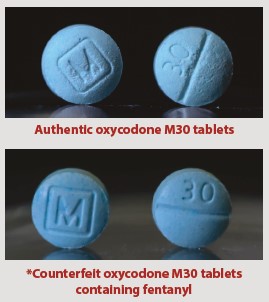 “While in the midst of the country’s opioid crisis, counterfeit prescription pills like Percocet, Xanax and Oxycontin, continue to be abused at alarming rates,” said the Special Agent in Charge of the DEA Atlanta Field Division (AFD) Robert J. Murphy. The AFD covers the states of Georgia, North and South Carolina. These dangerous, and potentially deadly pills often contain a deadly dose (about two milligrams-the approximate size of a number two (2) pencil lead) of fentanyl. Correspondently, the DEA Atlanta Field Division placed all hands-on deck and leashed an unwavering assault against the drug distribution networks directly responsible for pushing these poisonous pills. The fruitful results of this operation should let counterfeit pill pushers know that DEA will continue to confront, engage and eliminate drug trafficking in order to protect our communities.”

Mexican criminal drug networks are mass-producing illicit fentanyl and fentanyl-laced fake pills using chemicals sourced largely from China., and are distributing these pills through U.S. criminal networks. These fake pills are designed to appear nearly identical to legitimate prescriptions such as Oxycontin®, Percocet®, Vicodin®, Adderall®, Xanax®, and other medicines. Criminal drug networks are selling these pills through social media, e-commerce, the dark web, and existing distribution networks. As a result, these fake pills are widely available. The U.S. Department of Justice will continue to collaborate closely with its international partners, within Mexico and around the world, to aggressively investigate and prosecute the members of these drug networks.
These fake pills are more lethal than ever. DEA laboratory testing reveals that today, four out of 10 fentanyl-laced fake pills contain a potentially lethal dose. Moreover, the number of fake pills containing fentanyl has jumped nearly 430 percent since 2019.

On August 3, 2021, DEA launched a nationwide law enforcement effort to address the alarming increase in the availability and lethality of fentanyl-laced fake pills. Fentanyl—in powder and pill form—is a significant U.S. public health threat that is killing tens of thousands of Americans. Over the past two months, working in concert with federal, state, and local law enforcement partners, DEA seized 1.8 million fentanyl-laced fake pills and arrested 810 drug traffickers in cities, suburbs, and rural communities spanning the United States. The amount of deadly fentanyl-laced fake pills seized by DEA since August 3rd is enough to kill more than 700,000 Americans. These recent seizures add to the more than 9.5 million potentially deadly fake pills that DEA seized in the past year, which is more than the last two years combined.

During the two-month law enforcement surge targeting fake pills, DEA also seized 712 kilograms of fentanyl powder: enough to make tens of millions of lethal pills. DEA seized 158 weapons and many of the enforcement actions are tied to violence and overdose deaths. Additionally, DEA seized 4,011 kilograms of methamphetamine and 653 kilograms of cocaine.

DEA issued a Public Safety Alert on Monday, September 27, 2021, warning the American public about the increasing availability of fake pills that are more deadly than ever before, and that are easy to purchase, widely available, and often contain deadly doses of fentanyl. DEA also launched the One Pill Can Kill campaign to inform the American public of the dangers of fake prescription pills. The only safe medications are ones prescribed by a trusted medical professional and dispensed by a licensed pharmacist. Any pills that do not meet this standard are unsafe and potentially deadly.