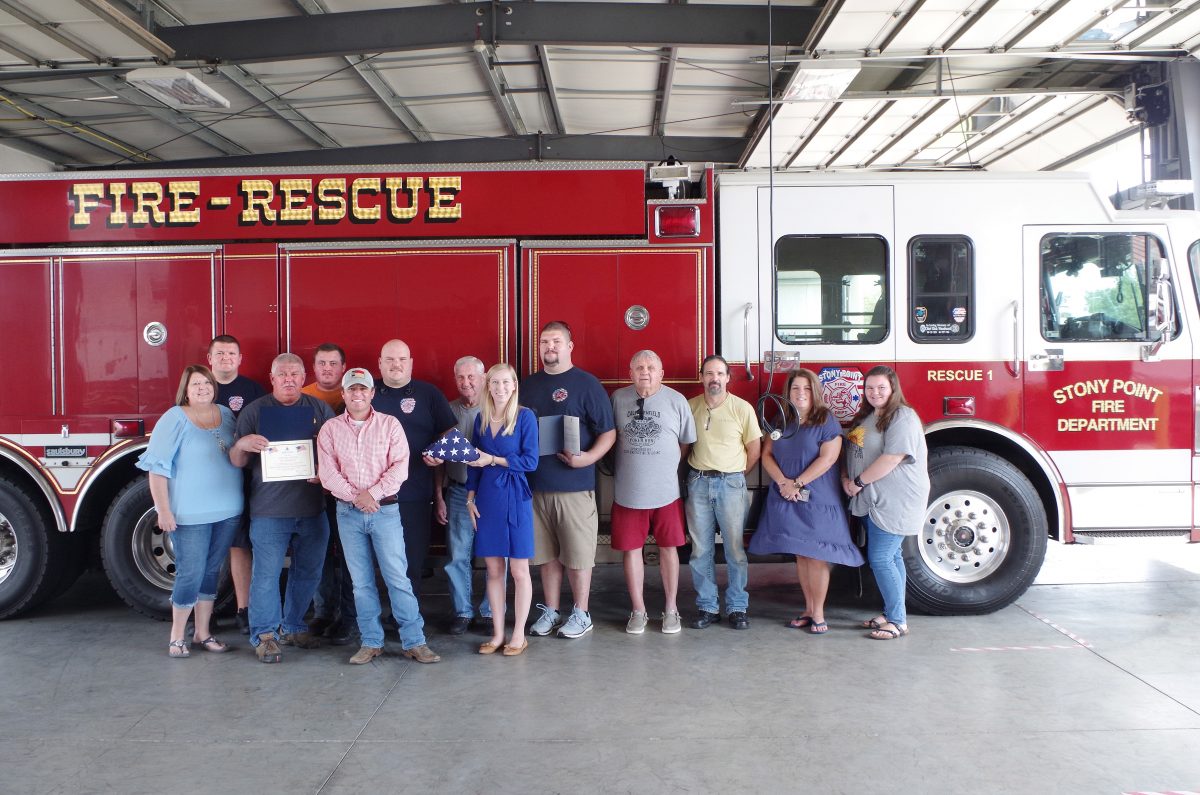 A presentation to Chief Abernathy and fellow firefighters was made on Friday, October 1, by members of U.S. Senator Thom Tillis’ staff, Stephanie Blair and Jordan Barnes, at Stony Point VFD Station 1.

Chief Abernathy remarked, “Stony Point Fire Department will use the grant for a vehicle exhaust system, by Plymovent. The exhaust fumes in the fire station from diesel fire engines are a firefighter’s most significant cancer health risk. It is essential to create the most healthy and safe work environment as possible for our firefighters.”

The Plymovent product literature states, “Diesel exhaust particles are often too small to be captured by onboard filters. Toxic gases are not captured by particulate filters, and only partially by activated carbon filters. The Plymovent source capture system captures these particles and gases before they enter the fire station, and expels them to the outside. As a fire truck exits the station, diesel exhaust is expelled with force. The Plymovent source capture system prevents it from being spread throughout the fire station including the living quarters.”

The department will expend $5,095.20 to purchase the ventilation system.

In a letter, Senator Tillis remarked, “Dear Chief Abernathy, I am happy to extend my sincerest congratulations to you and the entire Stony Point Volunteer Fire Department on receiving an Assistance to Firefighters Grant from FEMA. Your commitment to enhancing the safety and security of our citizens is evident on a daily basis and I humbly thank you for your service. I am proud of North Carolina’s first responders and their dedication to our communities. You are making a difference and I applaud the great work you are doing. Each day as you serve, know that you and your family are in my thoughts and prayers.”

In addition to the grant, Barnes and Blair presented a U.S. Flag to the department which had flown over the U.S. Capitol at the request of Senator Tillis.