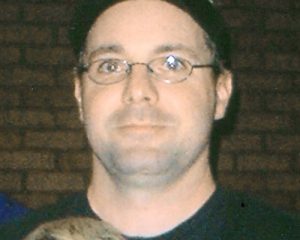 Christopher was born December 27, 1973, in Baltimore County, Maryland, the son of Teresa Ann Ely of Taylorsville, and Warren Dennis Early (Lorie) of Statesville.

He was a US Army veteran who served in Cuba and Turkey. He loved his two cats, Big Baby and Lucky. His team was the Broncos and he loved to watch them play.

He was a loving father, son, and brother. He had a big heart of gold and his smile would light up a room. Chris had so many friends and co-workers, he enjoyed their friendship. He worked as an upholsterer for many years. “He was the best Yu-gi-oh, and Pokemon-Go player and loved playing with his son.”

He was preceded in death by his grandparents, Marion Oswinkle and Louis Ely.

A Celebration of Life Service will be held at 6 p.m., Friday, October 15, 2021, at Adams Funeral Home Chapel with full military honors accorded by Alexander Veterans Honor Guard. Rev. Keith Bowman will officiate. Inurnment will be at a later date. The family will receive friends one hour prior to the service.

The family will also gather at Teresa Ely’s home at 266 Allendale Lane, Taylorsville.

The family would like to express a special thanks to the doctors and nurses in the CCU unit for the care they gave him.

In lieu of flowers, memorials may be made to Beulah Baptist Church, 336 Black Oak Ridge Road, Taylorsville, NC 28681.

Adams Funeral Home and Cremation Services is honored to be serving the family of Christopher Dennis Early.