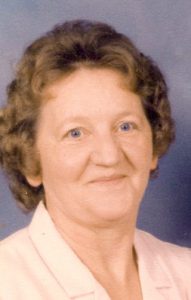 Mary Genevieve Herman Shew, 86, of Taylorsville, passed away on Tuesday, October 12, 2021, at Accordius Health in Wilkesboro.

She was born September 20, 1935, in Alexander County, the daughter of the late Andrew Flemings Herman and Luella Fox Herman.

She worked in the furniture industry, where she retired from Broyhill Furniture after 40-plus years. She was a member of Three Forks Baptist Church and loved to grow flowers.

Including her parents, she was preceded in death by her husband, Floyd Shew; son, Rocky Shew; sister, Marshline Corn; and brothers, Hansford, Roy, Ray and Wayne Herman.

The funeral service will be held at 4 p.m., Thursday, October 14, 2021, at Mt. Olive Baptist Church. Rev. Eddie Jolly and Rev. Monte Mathis will officiate. Burial will follow in the church cemetery. The body will lie in state from 3-3:45 p.m. prior to the service.

Memorials may be made to Mt. Olive Baptist Church Cemetery Fund.

Adams Funeral Home and Cremation Services is honored to be serving the family of Mary Genevieve Herman Shew.