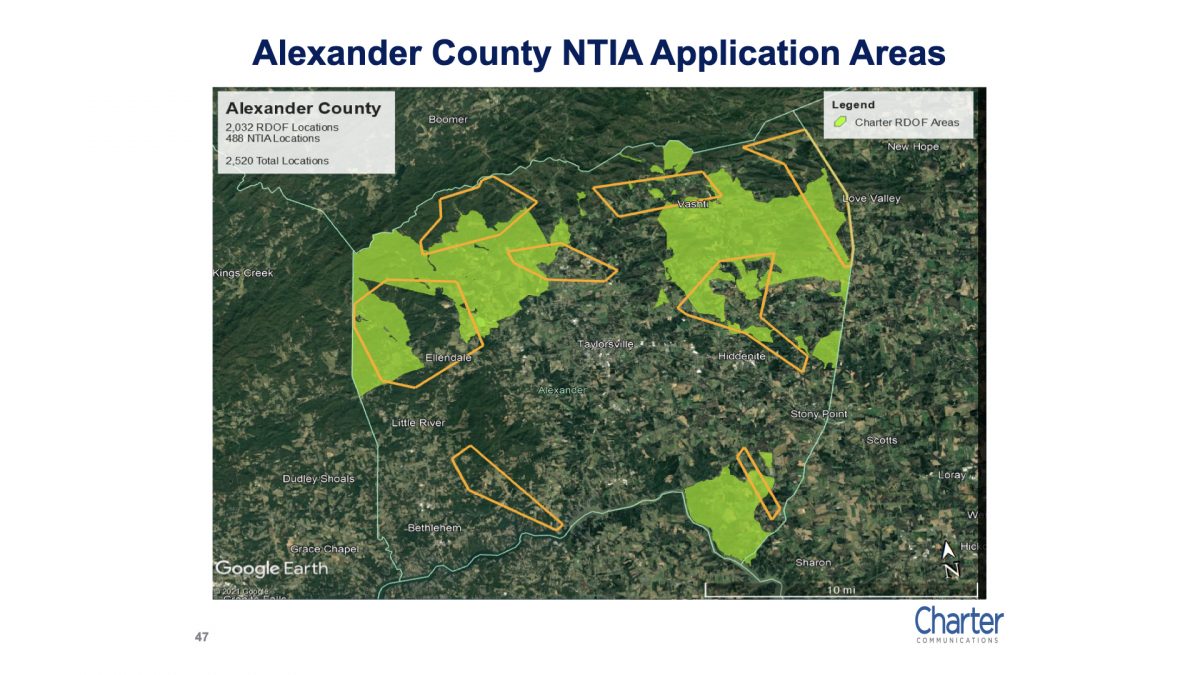 CHARTER TO EXPAND BROADBAND INTERNET — Charter Communications plans to use two types of Federal grant monies to expand high speed Internet offerings to rural parts of Alexander County in the areas shaded in light green and in yellow outline boxes, above.

The Alexander County Board of Commissioners heard reports about local broadband efforts from both Charter Communications and Open Broadband LLC at the October 11th, 2021, meeting, according to a county press release.

Mike Tanck, Director of Government Affairs for Charter Communications (Spectrum), was first on the agenda to discuss broadband initiatives. He presented information about the Federal Communications Commission’s Rural Digital Opportunity Fund (RDOF) grant program which is designed to address the need to expand broadband into rural areas across the country. Tanck said RDOF areas are census blocks in which not a single home has access to broadband.

He said Charter was awarded over 1 million locations in the country, over 125,000 in the state, and 2,032 addresses in Alexander County, mostly in the northwestern, northeastern, and southeastern sections of the county. These predetermined locations will get fiber-to-the-home connections which will offer download speeds of at least 200 Mbps. Customers will also have the option to purchase TV/video and phone service. Tanck said it is a $5 billion investment in rural broadband that must be complete within a six-year period. Learn more at www.spectrumruralexpansion.com.

Tanck said there are many other areas of the county that are not serviceable, but do not meet the RDOF requirements; therefore, Charter has been working with the county to submit a grant application to the National Telecommunications & Infrastructure Administration (NTIA). The program offers $288 million across the country and is targeted for counties with populations less than 50,000 people. There is no financial commitment from the county.

“I believe we put together a strong application, but if we are unsuccessful we will look at the next opportunity to move forward,” Tanck said. “We are looking to find ways to get broadband out there.” 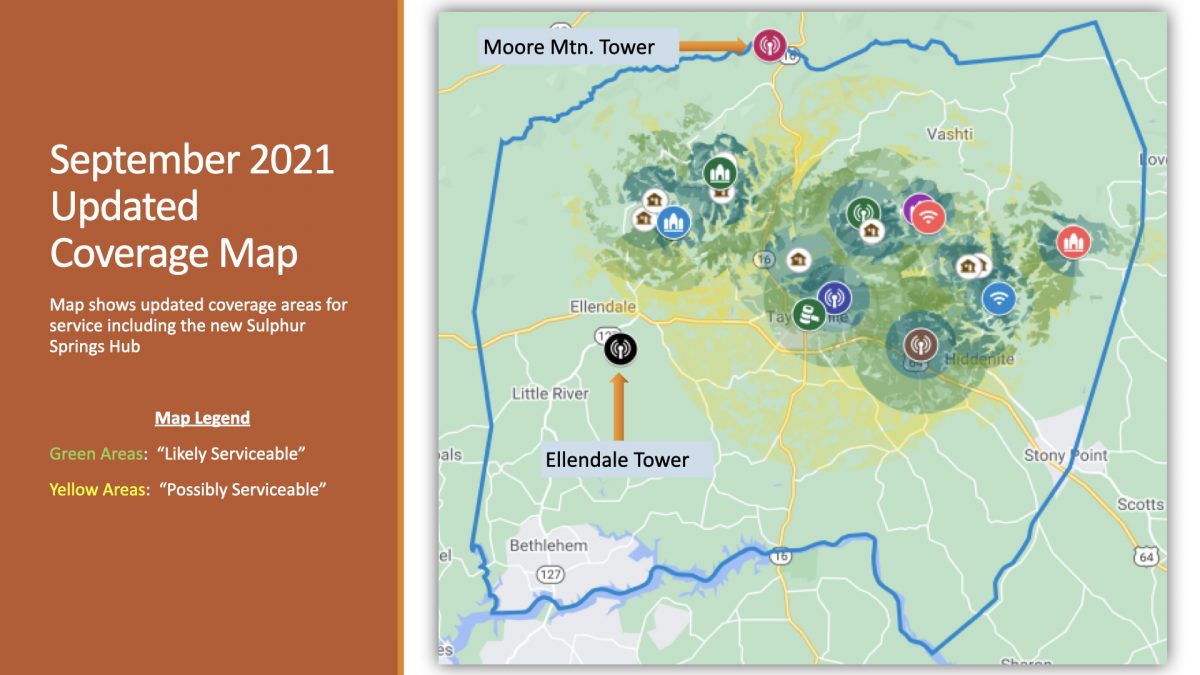 Next on the agenda was a broadband update from Open Broadband LLC. David Moose, Alexander County Compliance & Procurement Specialist, and Nick Steward, Open Broadband Western NC Area Manager, presented the update to commissioners. To date, the company has 190 customers in Alexander County, with 55 customers at 50 Mbps or greater. Broadband service was recently expanded in the northeastern section of the county with a hub on Sulphur Springs Road.

Phase one of the current project includes the installation of equipment on towers on Willie McLeod Road and on Moore Mountain, which will provide broadband service to the Ellendale community and parts of northwest Alexander County. The equipment is scheduled to be installed on November 6. New customer installations from these tower sites will begin on November 30.
Phase Two will provide broadband to eastern and northeastern parts of the county. One tower location has been determined in Stony Point and negotiations are underway with another tower owner.

“We understand that broadband is a true need here in Alexander County and are striving to improve our citizens’ quality of life by working to expand internet coverage,” said Larry Yoder, Chairman. “It’s exciting to have two companies working on broadband at the same time here in Alexander County. I’m glad that federal and state agencies are finally understanding that digital inclusion is necessary in rural areas.” 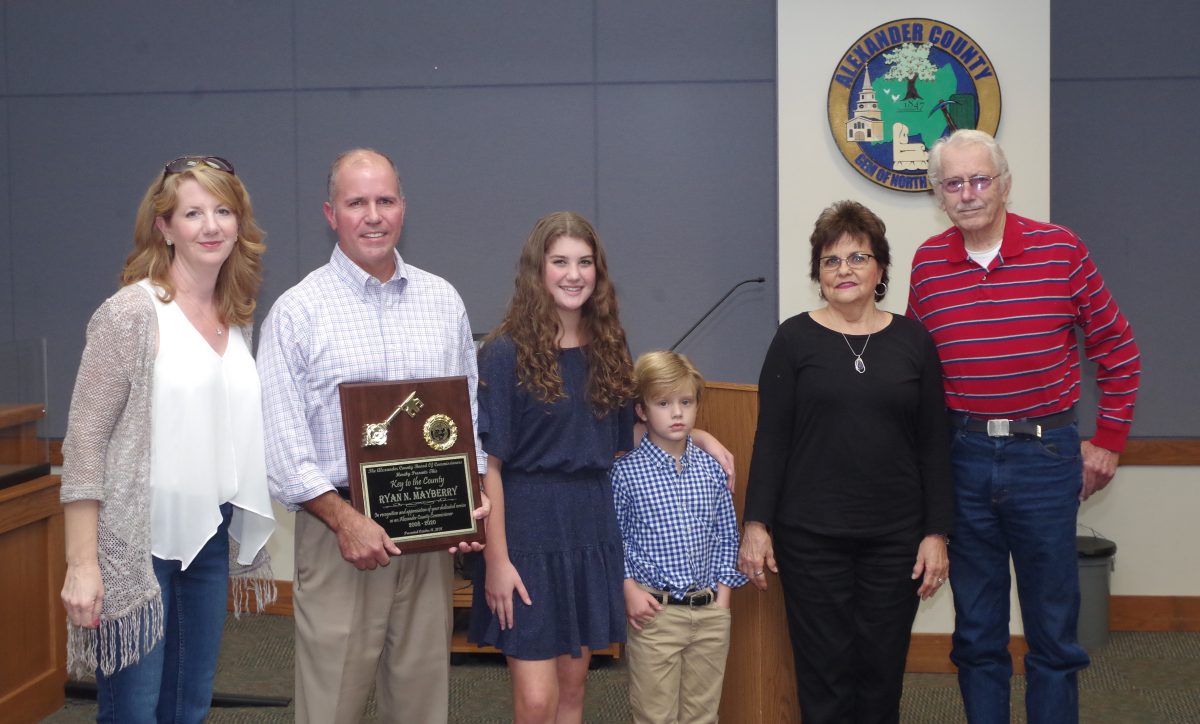 • Former commissioner Ryan Mayberry was presented a “Key to the County” for his 12 years of service on the board. He was first elected in 2008, and re-elected in 2012 and 2016. He served three years as chairman and four years as vice chairman.

“Ryan only had one thing in mind during his time as a county commissioner – to make Alexander County a better community,” Chairman Yoder stated.

Mayberry expressed his appreciation for the recognition from the board. He said, “Being a commissioner is a lot of work. People don’t realize how much time it takes to do this job. It’s not just meetings, but also many phone calls and emails, and planning for the future. We couldn’t do any of it without our county employees. We have accomplished a lot of things. I would like to especially thank the citizens of Alexander County for allowing me to serve.”

• County Manager Rick French reported that the county received one bid for construction of phase two of the new Alexander County Courthouse Park, which includes a splash pad and a picnic shelter. Lail Builders, Inc. submitted a bid of $410,074. Commissioners approved the bid. It was noted that Commissioner Josh Lail is not affiliated with Lail Builders.

• Commissioners approved a “light rescue” contract with the Hiddenite Volunteer Fire Department. Fire Marshal Mark Earle said the department has submitted the proper paperwork and met all requirements to serve as a light rescue unit. He recommended approval of the contract as the partnership will reduce response times in the Hiddenite fire district. Earle noted that Bethlehem and Stony Point fire departments are already certified in light rescue, with two other departments currently in the process of becoming certified. Alexander Rescue Squad is heavy certified.

• The Commissioners approved a resolution to transfer a natural gas line and associated easements and rights-of-way to Dominion Energy North Carolina for the sum of $1.00. David Icenhour, Alexander County EDC Executive Director, said the pipeline construction agreement was approved by the board in April 2014. The gas line was constructed to provide service to Mitchell Gold + Bob Williams. The county received funding from the Industrial Development Fund of the NC Department of Commerce to construct the pipeline.

• Leeanne Whisnant, Consolidated Human Services Director, presented a COVID-19 update to the board. She said that case numbers are starting to decline with only 74 cases in the last seven days, which is significantly lower than a month ago. There are currently nine people in the hospital with COVID-19. There have now been 120 deaths associated with the virus. The county’s test positivity rate is now 8.6 percent, which is down from 15 percent, but is still higher than the state rate. Approximately 39 percent of Alexander County citizens are fully vaccinated (two doses), with an additional 3 percent having received one dose. Pfizer booster shots are available for those age 65 and older and those age 18 and older with underlying medical conditions who had the vaccine six months ago or more. Third doses are available for those who are immunocompromised. Whisnant said the schools are not seeing a lot of cases in students or staff.

On a different note, she said there have already been several cases of influenza this season and encouraged citizens to get a flu shot. The health department is conducting a drive-thru flu shot clinic on Fridays from 1:00 to 3:00 p.m.

• Commissioners approved a rezoning request from Daniel Pullin, Jr., regarding one acre of property located off Lail Lane. The property was rezoned from R-20 (residential) to RA-20 (residential-agricultural).

For 999 Jenkins Moose Road and 315 South Center Street, commissioners issued an order of abatement to begin after 30 days to allow time for the property owners to clean up the property. Trash and tall grass are the main issues.

For 415 Greenlea Circle, commissioners issued an order of abatement to begin after 60 days. County staff have been unable to contact the property owner, and will have to begin arranging services to abate the property, which has overgrown vegetation and rodent problems that are affecting adjoining properties. The house was declared unsafe in July 2021.

• Commissioners approved a resolution declaring the week of October 23-31 as “Red Ribbon Week” in Alexander County. Corporal Vince Sothoron of the Young Marines group presented information about the special week which enhances awareness of the use of illegal drugs and the illegal use of legal drugs. Earlier in the meeting, Corporal Sothoron led the Pledge of Allegiance.

• Commissioners designated the Chief Code Enforcement Officer as the official who will notify the North Carolina ABC Commission of the recommendations of Alexander County Government regarding the suitability of persons and locations for ABC permits.

He also presented a brief update on the realignment of mental health services in North Carolina. Vaya Health currently serves 22 counties, which includes Alexander County, and will be adding nine counties to its service area in January 2022.

The next meeting is set for Monday, Nov. 1, at 6:00 p.m. in Room #103 at the CVCC Alexander Center for Education in Taylorsville.