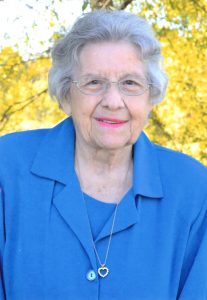 She was born on December 30, 1927, in Alexander County, the daughter of the late Burette “Ret” and Beulah Bowman Stafford.

She was a lifelong member of Friendship Lutheran Church, where she was a member of WELCA and a Sunday school teacher. Mabel retired from the Wittenburg Elementary School Lunchroom.

Along with her parents, she was preceded in death by her husband, Kelly Bowman; her daughter, Deborah Mecimore; her brother, Howard Stafford; her sisters, Christine Fox and Maxine Mays; and her son-in-law, Dennis Rogers.

The family would like to express a special thank you to all her special caregivers, Mary Griffith, Gail Herman, Shana Reames, and Alexander County Hospice.

The funeral service will be held at 4 p.m., Monday, October 18, 2021, at Friendship Lutheran Church. Pastor Tim Canniff-Kuhn will officiate. Burial will follow in the church cemetery. The family will receive friends from 2:30 p.m. until 3:45 p.m. prior to the service in the Family Life Center at Friendship.

Adams Funeral Home and Cremation Services is honored to be serving the family of Mable Stafford Bowman.