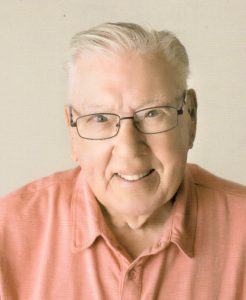 Harry was born May 25, 1929, in Alexander County, the son of the late Durant Robertson and Eva Lackey Robertson.

Harry was a 1948 graduate of Stony Point High School. He was a member of South River United Methodist Church where he served as Chairman of the Board of Trustees for many years and was a former Lay Leader of the Year.

Harry proudly served in the United States Army and was a Korean War Veteran, having been honorably discharged with the rank of Sergeant.

His community and civic involvements were numerous and varied, including former Chairman of the Gwaltney Community Development Association and he was honored by the Gwaltney Ruritan Club with their Citizen of the Year Award in 1995; past President of the Taylorsville Jaycees and he was awarded a lifetime membership; past Master of Lee Lodge #253; a 32nd degree Mason; member and past President of the Brushy Mountain Shrine Club; member of the Scottish-Rite in Charlotte; the Oasis Temple; the past Masters Unit and served on the Board of Trustees of the Oasis Shrine Headquarters in Charlotte (1997-2000).

Harry worked on numerous political campaigns over the years and served as the county campaign chairman for Senator Jim Broyhill, Jim Martin for Governor, and Jim Gardner for Governor. He was inducted into the NCGOP Hall of Fame in 1995, the first person in our area to have been awarded this honor. He was also inducted into the Alexander County GOP Hall of Fame in 2012.

Harry was awarded the Order of the Long Leaf Pine by Governor Jim Martin. He retired from the DOT in 1994 but not before playing an instrumental role in getting a US Highway re-routed through Alexander County. The new 20-mile highway was constructed and named in his honor.

Those left to cherish and honor his memory include his daughter, Jill Robertson of Hiddenite; his granddaughter, Kara Smith (Andrew) of Hiddenite; his great-granddaughter, Paislee Smith; bonus great-grandson, Garren Smith; special friend, Suma Davidson; his sister, Ruth Fann of Swansboro; his brother, Donald Robertson (Ann) of Taylorsville; and a number of nieces, nephews, cousins, and special friends.

A graveside service will be held at 2 p.m., Friday, October 29, 2021, at South River United Methodist Church with full military honors accorded by Alexander County Veterans Honor Guard. Pastor Doug Hochmuth, Pastor Ray Tevenner, and Pastor Greg Lee will officiate. The family will receive friends from 1-2 p.m. prior to the service at South River United Methodist Church. The body will lie in state from 9-11 a.m., Friday, October 29, 2021, at Adams Funeral Home.

Memorials may be made to Brushy Mountain Shrine Club.

Adams Funeral Home and Cremation Services is honored to be serving the family of Harry Lee Robertson.