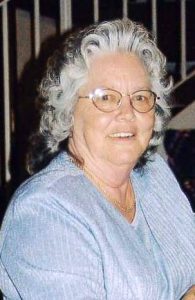 Peggy was born on July 12, 1938, in McDowell County, West Virginia, to the late Oley Little and Gladys Elmore Holleman.

Peggy was a doting mother and grandmother who enjoyed shopping, traveling, going to yard sales, trips to the beach and mountains, and going “home” to West Virginia. She was an avid West Virginia Mountaineers fan, always pulling for the blue and gold! Peggy adored her family who was always considered first and foremost in her life. She will be deeply missed by all.

In addition to her parents, she was preceded in death by her husband, Silas Farley Jr.; brothers, Everett Little and Lewis Little; sister, Virginia Little; and step-father, Doug Holleman.

A funeral service, officiated by Pastor Dale Watts, will be held at 2:00 p.m. on Tuesday, November 2, 2021, in the chapel at Bass-Smith Funeral Home in Hickory. The family will receive friends one hour prior to the service. Burial will follow at Woodlawn Memorial Gardens. Following the graveside service, the family will host a reception in the Jack Bass Memorial Building at Bass-Smith Funeral Home.

Bass-Smith Funeral Home in Hickory is serving the Smith Family and online condolences may be sent to www.bass-smithfuneralhome.com.