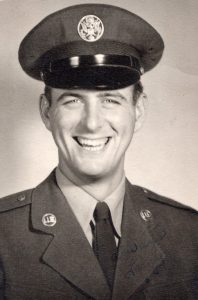 Larry was born in 1936, in Alexander County, the son of the late Robert William and Mary Johnson Pressley who spent six months in Flagler Beach and six months in North Carolina during their retirement years.

Larry joined the United States Air Force in 1954, spending most of his time in the South Pacific, mainly in Japan working in Air and Ground Radar. After military service, Larry enrolled at Clevenger’s Business School where he majored in business and transportation.

He worked for Thurston Motor Lines in transportation and logistics as Terminal Manager where he retired with 30 years’ service. After retirement, he and his wife, Marilyn, owned and operated Conover Florist and Claremont Florist for many years.

Larry was preceded in death by his wife of sixty years, Marilyn Green Pressley, in 2018.

The family will receive friends from 10 until 11:45 a.m., Wednesday, November 10, 2021, at East Taylorsville Baptist Church, in the Jennings Building, with the funeral service to follow at 12 noon. Pastor Jamie Steele will officiate the service. Interment with military honors will follow at 2 p.m. at Catawba Memorial Park, Hickory.

The Padgett and King Mortuary of Forest City is in charge of arrangements and an online guest registry is available at www.padgettking.com.