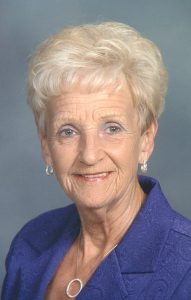 Geraldine Smith Warren, 80, of Taylorsville, passed away on Wednesday, December 15, 2021, at her home.

She was born August 24, 1941, in Alexander County, the daughter of the late Walter B. Smith and Edna Elder Smith.

She worked for Rock Tenn for 40-plus years as a Personnel Administrator and was a member of Millersville Baptist Church. She loved to travel and spend time with her grandchildren. She loved her church family as well.

Including her parents, she was preceded in death by her brother, Walter Eugene Smith.

The funeral service will be at 2 p.m., Monday, December 20, 2021, at Millersville Baptist Church. Rev. Bill Orren will officiate. Burial will follow in the church cemetery. The family will receive friends one hour prior to the service.

Memorials may be made to Alexander County Hospice, 50 Lucy Echerd Lane, Taylorsville, NC 28681 or to Millersville Baptist Church.

Adams Funeral Home and Cremation Services is honored to be serving the family of Geraldine Smith Warren.