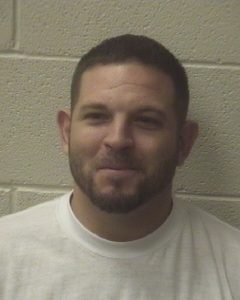 Local law enforcement officers were involved in a chase with a suspect in a stolen vehicle on the evening of Wednesday, January 5, 2022, which spanned two counties.

Alexander County officers were notified of a suspect who had stolen a vehicle and was traveling on Liledoun Road on the evening of January 5 about 7:19 p.m. Taylorsville Police Department Patrolman M.B. Woods and other town officers were also notified, Woods said in his incident report.

After Hamby began following Sain, Sain accelerated away, and a chase ensued on Church Road, Wayside Church Road, and NC 16. Woods also became involved in the chase and when Sain reached NC 16, he turned right onto 16 South and crossed the bridge at Oxford Dam. Woods became the lead police car in the chase.

After crossing the bridge, Sain turned left, making the truck burst through the locked gate at Riverbend Park in Catawba County. He continued up into the parking lot and onto a dirt logging road, the patrolman stated. The chase continued through the woods for about one mile. Sain missed a turn and crashed the truck into a tree, said Woods.

The patrolman said Sain repeatedly refused to comply with commands to step out of the truck and surrender. Eventually, Sain was placed in custody.

Bradley Thomas Sain was charged by Taylorsville Police with Felony Possession of a Stolen Motor Vehicle, Reckless Driving, Felony Flee to Elude Arrest, Failure to Stop at Stop Sign, Driving Left of Center, and Unsafe Passing. He was placed in the Alexander County Jail under a $50,000 secured bond on these charges. Other charges are pending.