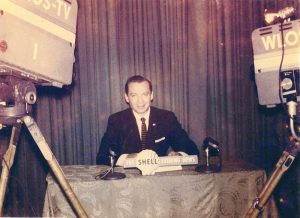 Ed was born on September 9, 1927, in Charlotte, to Betty Bumgarner and Poley Blake Barnes, both originally from Taylorsville. He grew up there with his two brothers and two sisters and worked after school and summers at his father’s specialty meat market, Morris and Barnes, at 227 West Trade Street in downtown Charlotte. During his radio and television broadcasting career, Ed worked at WLOS in Asheville, WMIT in Mt. Mitchell, and WXRC in Hickory.

In his later life, Ed moved east to Kinston to live with his sister and her family.

Ed was preceded in death by his brother, Robert, and his sister, Vivian, and is survived by his brother, George; sister, Carmena Ruth Barnes Zimmerman; nephews, Cullen Zimmerman, Chico Zimmerman, Blake Barnes, and Jack Barnes; and niece, Carla Zimmerman.