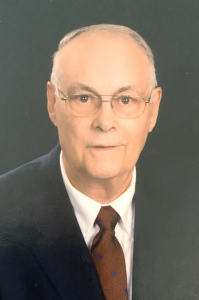 Ray was born on November 2, 1933, in Alexander County, and was the son of the late Parks Leeper Keever and Cora Lee Wike Keever. He attended Hiddenite High School and served in the US Army.

On June 1, 1958, he married Joyce Burrus Keever, who survives. He was a member of Beulah Baptist Church. Ray worked for Southern Furniture for a number of years and retired from Glen Eagle Marine Furniture.

In addition to his wife, Ray is survived by two sons, Steven Keever (Kim) of Dunwoody, Georgia, and Eric Keever (Carla) of Statesville; six grandchildren, Benjamin, Annabel and Rachel Keever, Parks and Samantha Keever, and Courtney Goble; a sister, Ruth Reid; and numerous nieces and nephews.

A celebration of life service will be held at 1:00 p.m., Saturday, January 29, 2022, at Beulah Baptist Church with Rev. Brian Burgess officiating. The family will speak with friends following the service at the church.

Memorials may be to Beulah Baptist Church and online condolences may be made to the family at www.troutmanfuneralhome.com.