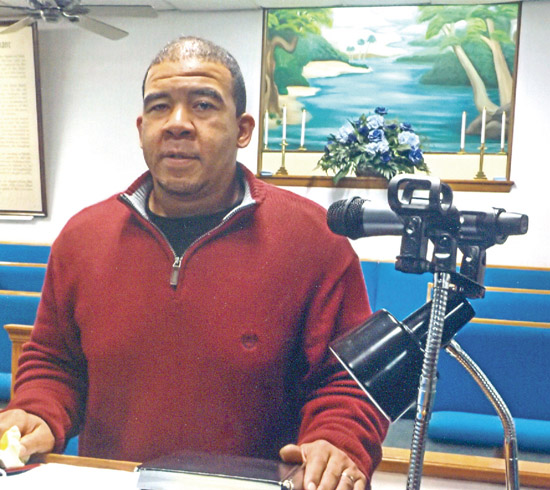 Elliot was trained under the former Pastor Ardeal Roseboro at Liberty Grove Baptist Church in Taylorsville. After Pastor Roseboro’s retirement, Rev. Boston was elected as the church’s new pastor.
“I am amazed,” said Boston. “Growing up, I thought football would be my future. God has a way that is so sweet and your life will change.”

Elliot is a 1998 graduate of Alexander Central High School, where he played football.

“After high school, I became interested in cooking because of my dad, who cooks at Scotty’s Hometown Grill in Taylorsville. I decided to take a cooking course at Johnson & Wales Culinary School in North Miami, Florida.”

After finishing school, Elliot was hired as head chef at Catawba Memorial Hospital in Hickory, where he has worked for the past 19 years.

Pastor Boston is a busy man, he’s on the job by 3 a.m., preparing the food menu for the hospital and on Sunday, he’s preaching God’s Holy Word. Elliot, who enjoys his ministry, says his favorite Scripture is John 1:29.

His mother, Sherri Boston, says, “We are so proud of our son.”

His father, Ernest Boston, said, “We are blessed and grateful for him. He is serious about doing God’s work.”

“I never thought my brother would be my pastor,” said his sister, Courtney, “because he was so shy growing up.”

Rebecca Dula, a retired school teacher, stated, “I was his teacher in second grade and now he’s my pastor, teaching me.” She also said Elliot is “a wonderful pastor who knows the Scripture and enjoys teaching the young and old.”

His wife, Joyce, who owns and operates her own food truck, JB’s Rolling Bistro, said, “I am happy for him. He thought about becoming a minister for two years, afterwards, he became very serious about it.”

“I used to come to church and stay in the fellowship hall and meditate on the Lord for hours,” said Pastor Boston. “If you trust God and wait, He will give you the wisdom you need.”

Sound technician Charley Howell said, “He’s a great asset to Liberty Grove and we love him.”

Musicians Edsel and Howard Flowers said, “We are blessed to have him.”

Deacon Alfred Dula, age 86, the oldest member of the church, said, “I remember holding him on my lap; I keep encouraging him to stay strong and trust God.”

Deacon Johnathan Boston, who is also Elliot’s uncle, said, “He’s a good kid and I respect him.”

Brian Teague, a classmate of his, stated, “I am very proud of Bub (Elliot’s nickname).”

Lindsay Parson, chairman of the deacons, said, “He’s a good man who preaches the word of God.”

“My goal for Liberty Grove is to spread God’s Word in the community, help people and be an example for Christ. When I am preparing to preach my message on Sundays, I pray and ask God for wisdom; I try to preach what God’s people need. Their need might be for sickness, comfort, encouragement, help, joy, whatever the case may be, I try to do the will of God. It’s not about me, but God,” stated Pastor Boston. “Pastors need prayer also, and I know my members are encouraging and praying for me.”

Pastor Boston’s favorite food is sushi and his favorite football team is the Colts. He and his wife, Joyce, are the parents of three children and they reside in Catawba County.