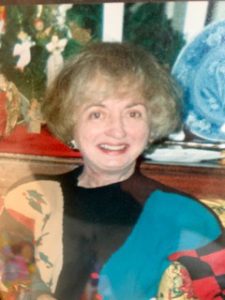 She was predeceased by her parents, her brother, Edward Hedrick III, and her husband of 54 years, William H. Barefoot.

Martha was born February 20, 1937, in Taylorsville, to Johnsie and Edward Lawrence “Lape” Hedrick. She attended and graduated from Taylorsville High School, class of 1954, as valedictorian. She graduated from her beloved Lenoir-Rhyne College in 1957 and married Bill Barefoot in June of that same year.

After a brief teaching career, she then devoted the next phase of her life to being a supportive wife while raising and educating her three children. Martha was widely viewed as a kind and gracious person, a wonderful wife, mother, grandmother, and a good friend to many. She delighted in celebrating the accomplishments of her children and grandchildren as well as telling and reliving her own accomplishments!

She loved her hometown of Taylorsville, reading, contemporary art, sporting events, walking, shopping, family trips to Sunset Beach, and Thanksgiving (the food, not the cooking). Correct grammar and academic accomplishments were also extremely important to her!

She belonged to several civic organizations including the Jr. Woman’s Club of Hickory and the Symphony League of Columbia. She was a longtime member of First Presbyterian Church, Columbia, South Carolina, and was active in the Women of the Church, serving as a circle member, in various officer positions, and being honored with the distinction “Honorary Life Membership,” the highest honor awarded to WOC members in recognition of extraordinary Christian service to the WOC.

As her health and independence circumstances changed, she left behind her life and home in Columbia but she rarely complained and handled the changes with grace and humor, always expressing gratitude for the help and care she received. She will be greatly missed by her family and friends.

A private family service will be held in Columbia later this month.

Donations may be made to First Presbyterian Church, 1324 Marion Street, Columbia, SC 29201.