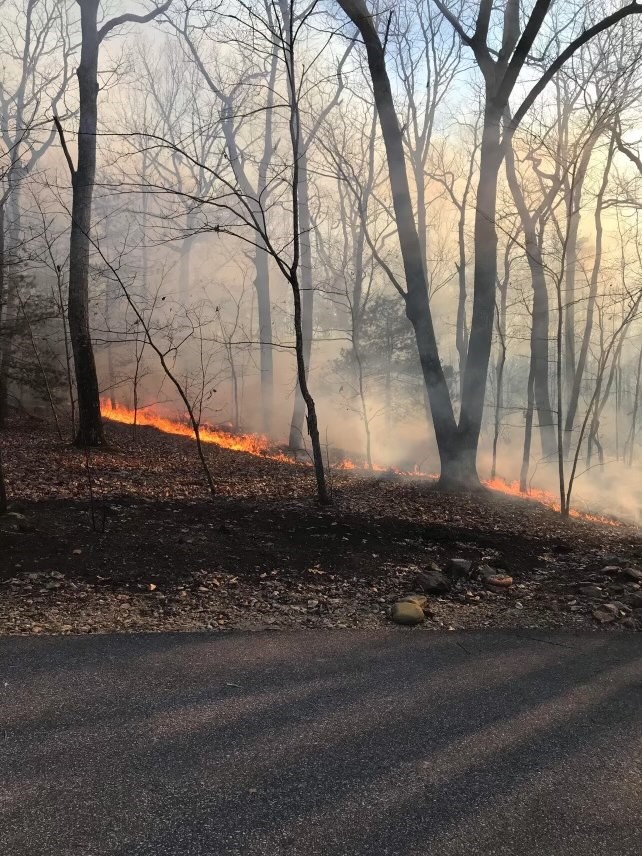 This was the scene at the brush fire off Millersville Road on March 3, 2022. (Photo courtesy of Donald Barnett.)

Spring fire season began with several blazes already, said David Huffman, Alexander County Ranger with the North Carolina Forest Service. Peak months for the spring fire season run from March through May. He outlined the fires and their locations as follows:

• A small less than 1/10 acre fire was extinguished in Bethlehem Thursday, March 3, under some Leland Cypress trees. The cause is undetermined at this time.

• Later that afternoon, the Hiddenite Fire Department and North Carolina Forest Service were dispatched to a brush/woods fire off Millersville Road in Hiddenite. Upon arrival, there was heavy fire in the woods which threatened several residences. Taylorsville and Stony Point Fire Departments were added to the call for brush truck assistance. The fire burned roughly 3 acres, said Huffman. No houses or outbuildings were damaged due to the fire. North Carolina Forest Service is investigating the cause at this time.

• While firefighters were fighting the fire on Millersville Road, a fire call was received on Black Oak Ridge Road. This fire consumed 2/10 acre and sparked from debris burning.

• On Friday, March 4, another brush fire was extinguished, this time off Rink Dam Road, involving 1/10 acre. It also stemmed from debris burning.

“We advise all folks to be careful with all their outside burning including recreational and yard clearing,” said Huffman. “Spring fire season is here and outdoor burning and activities should be done with caution due to the low humidity and increased wind gusts this time of year. NCFS thanks all departments and firemen involved.”