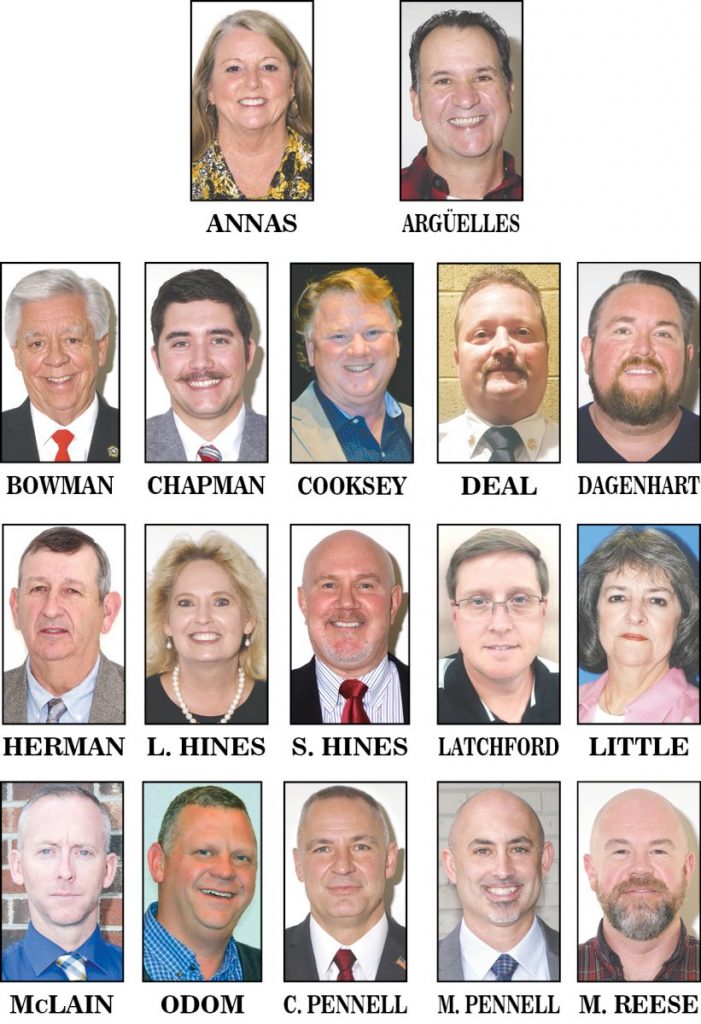 The Alexander County Board of Elections Office has announced the list of candidates who have filed for local offices in the 2022 general election. Filing ended at noon on Friday, March 4.

The candidates who filed since our last issue were asked to submit information about themselves (other filings responded to The Times’ questionnaire in earlier issues). Their responses
are below:

• Anthony McLain, age 44 of Hiddenite, filed on the morning of March 2 for the Board of Education District 4 seat.

“My name is Anthony McLain and I am running as a candidate for Alexander County School Board in District 4. I was born and raised in Hiddenite and attended Hiddenite Elementary School, East Junior High School (East, before it was a Middle School) and I graduated from Alexander Central High School. I remember laying in my bed as a child and watching the glowing sky as the school burnt down. I can still remember going to school in the trailers and getting soaked in the rain on the boardwalks.

“I’m 44 years old am married to my best friend, my beautiful wife Michelle. I’m a faithful member of Sulphur Springs Baptist Church. We have two young men, Michael is in the United States Air Force and stationed in San Antonio, TX. Aaron is in the eighth grade at East Alexander Middle School. I have had the privilege of raising my children in Hiddenite and in the Alexander County Schools. Both attended the “Baby Cougars” program at Alexander Central High School, Hiddenite Elementary School, East Alexander Middle School, and Michael graduated from ACHS. Throughout my children’s years in the Alexander County School System, I have had the opportunity to serve on the PTO including serving as President and Co-President of the PTO at Hiddenite Elementary, I was a parent representative on the selection of a principal at Hiddenite Elementary, I have volunteered numerous hours, chaperoned numerous field trips, bought numerous pumpkins for kids to decorate in the fall, and have been an active part of my children’s educational experience. At East, I serve on the Parent and Community Together Committee and the School Improvement Team. I continue to try to be involved in my children’s education experience.

“Throughout my career as a State Trooper, I have assisted with Driver’s Education classes, Prom Promise’s, Career Days, Reading Across America, and just dropping by the schools to visit the kids. I have my General Instructor Certificate and I teach at Mitchell Community College in the Basic Law Enforcement program and at the North Carolina State Highway Patrol’s Basic School in Raleigh. One of my greatest pleasures working with the kids was certifying them as ‘Official Siren Operators’ on Career Day.

“So, why am I running for school board? I am running for this position for the children and the instructional staff of Alexander County Schools. I want to be a voice for parents on the board and get parents more involved in the education system and provide them with more opportunities to do so. I want to see a fire and passion for teaching in our teachers, which will carry over into the children’s learning experience. I want teachers to have the ability to TEACH which will allow our children the opportunity to LEARN!

“Join me in this challenge and vote for me on November 8th, 2022!” McLain concluded.

• Kent Herman (R), age 64 of the Ellendale Community, is currently serving (appointed) as a County Commissioner to fill the first half of the unexpired term of the late Dr. Jeffrey Peal. Herman filed to seek election to keep that seat and serve the remaining two years of the unexpired term.

Herman is married to Martha Reid Herman and has three children: Tiffany Stephenson, Stephanie Wright, and Colby Herman. He has seven grandchildren and is the son of the late Ned and Kay Herman. Kent is a lifelong resident of Alexander County and is a conservative Republican.

Herman has served on the Alexander County Soil and Water Board for 23 years, the National Milk Producers Federation Board in Washington, DC, the Dairy Farmers of America Board in Kansas City, Kansas, and is the current chairman of the Southeast Council of the DFA and is on the DFA’s executive board. DFA is the largest dairy co-op in the United States.
Kent and his late brother, Rodney, and his late father, Ned Herman, have operated Herman Dairy Farm, Inc., since 1979. He also operates a beef and poultry business and H&H Arena along with his son and son-in-law. He is a member of Mt. Herman Baptist Church and is a partner of Country Grace Church.
Herman said he “is committed not to raise property taxes and to spend the taxpayers’ money conservatively and wisely” and would appreciate your vote.

• Justin Deal (R), age 47 of the Sugar Loaf Community, is seeking the two year unexpired term of the late Dr. Jeffrey Peal on the Alexander County Board of Commissioners. Justin is married to Carla Deal; they have three children Justin (JT), Jason (Jay), and Jaycey.

“Over the past thirty years I have served in the Public Safety sector of Alexander County. I started my career in the fire service as a junior firefighter and have served as a volunteer firefighter in Alexander County ever since. I have also worked as a medic with Alexander County EMS since 1995. Working closely with our governing bodies I have been able to witness our growth in emergency services. We at one time were known across the state as one of the elite services around. When I first got involved in emergency services someone had to retire or pass on before someone else could get a job or advance in position. This has changed across the board at every level of Public Safety in Alexander County. We have become a resume county at best. As county commissioner I will focus on recultivating our Public Safety sector back to the desired service it used to be. Most people don’t think about our emergency responders until they need them, I think about them every single day, because I am one of them and we are family.

• Dr. Dianne Little, Ed. D., age 72 of Sugar Loaf Community, filed as a candidate for Alexander County School Board, District 4. She is a retired educator and serves as a Leadership Consultant and is President of the United Way of Alexander County.

“My goal as a member of the Board of Education is a broad yet simple one: I want to serve the people of our county by doing the best job that I can to help our school system reach its full potential and be as strong as it can be. That will mean taking an honest look not merely from the viewpoint of individual board members but especially from the viewpoint of our students, teachers, administrators, and parents on the current status of our system. What are our strengths? Where do we need to improve? How can board members help us improve? How can parents help us improve? How can all of us work better together? I just think that we need open dialogue with all these groups to have a better understanding of how healthy we are and how healthy we must be as a school system to offer our young people the best possible education. That dialogue must involve more than any one individual or board member to bring about needed change.

“I want to run for the Board of Education for the same reason I stated above – to help our system reach its full potential and offer the best educational services possible to all our students. My experience and qualifications will enable me to do exactly that. My career has spanned over four decades and began at Alexander Central High School (ACHS), where I taught English for 23 years and served as the Yearbook Sponsor and Drama Director. In 1996, I left ACHS to become Assistant Principal and later Principal at Newton-Conover High School (NCHS). As Assistant Principal, I designed a program to recognize the accomplishments of students who excelled in academics, attendance, and attitude. When I retired as Principal in 2001, over 40% of the NCHS student body had achieved recognition in that program.

“I eventually assumed various roles at Catawba Valley Community College, including English instructor, Director of the MagnIT Program (a high school Informational Technology program on the campus), College Tech Prep Director, College Liaison with the Challenger Early College High School, and Director of the Phillips Leadership Academy (for faculty and staff) and the Student Leadership Academy. In each of those capacities, I continued to work closely with students and adults; and I had experience managing budgets, planning and designing curricula, conducting leadership training, and overseeing personnel.

“Throughout my career, I have also had a great deal of experience serving on various boards, including the North Carolina Association of Educators’ Board of Directors, the Alexander Center for Education Advisory Board, the Catawba Valley Community Foundation Board, and the CVCC Foundation Board. Serving on those boards has enabled me to understand the importance of cooperation and collaboration — qualities very essential to the success of any governing body. When people are passionate about a program, belief, or “cause,” they can easily forget the importance of those two qualities and become too laser-focused on a small part of the picture. That kind of focus rarely has positive results because it usually neglects other parties.

“I want only positive results from my potential membership on the Board of Education. I will do everything that I can to produce those results — not just for some but for all working for or attending the Alexander County Schools. Along the way, I especially want to acknowledge our students and our teachers for the way they have adapted to the demands of the past two years. My heart remains in the classroom; and during these challenging times, it has been heart-breaking to see how our students and their teachers have struggled. Both groups merit more support and encouragement from all of us, including board members, administrators, and parents. We must work together if we want our schools, students, teachers, and administrators to be successful.

“I have been blessed to be on the inside of every aspect of the educational process and to see that process from the lens of student, teacher, and administrator. My perspectives from each lens will enrich my performance and any contributions that I can deliver as a board member. I would appreciate and be humbled by the chance to serve in that capacity,” Little stated.