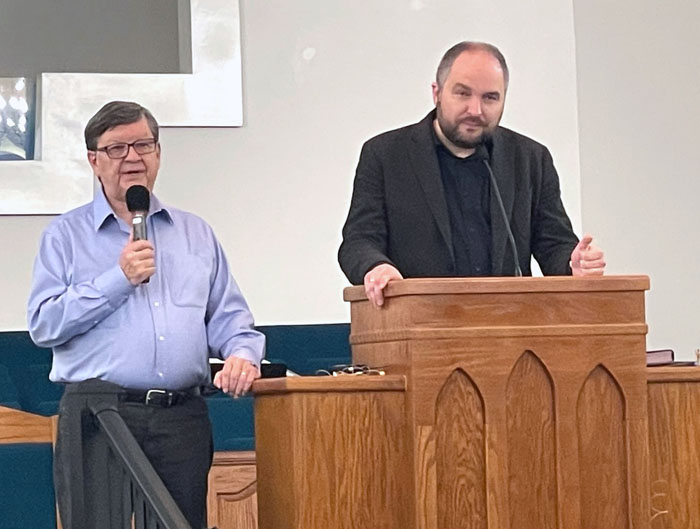 SPEAKING VIA INTERPRETER — Leo Semenov (left), missionary from Ukraine, interprets for Ukrainian Chaplain, Yaroslav Malko, while he shares a message with local churches.

Yaroslav Malko is the Senior Chaplain for Law Enforcement for all of Ukraine. He and his team are also in the process of developing a Chaplaincy Program for the Ukrainian military. He has visited military bases in the United States to learn from their chaplaincy programs. He says his team has a “great relationship with the Chaplaincy Marketplace in Dallas, Texas.” He has also visited the Billy Graham Training Center at The Cove to receive and share Chaplaincy training.

On this particular trip to the United States, Malko has been traveling with his youngest daughter, who is attending school in Atlanta, Georgia. He did not expect to be on an extended trip due to his inability to fly to his home country, Ukraine. As he described it, “our lives changed in one moment.”

He, like other Ukrainian citizens, knew that the Russian president was threatening to invade Ukraine, but they did not expect it to happen so soon or so suddenly. They also did not anticipate President Putin’s targeting of civilians. They were told that military bases would be the main targets. He says that “Ukrainians and all of the world have been lied to by President Putin.” His family sought cover in bomb shelters repeatedly before making their way out of the country.

His wife and oldest daughter have fled to Poland, while his 20 year-old son remains in Western Ukraine, assisting citizens fleeing from Eastern Ukraine.

Yaroslav was intending to be in the city of Kherson in Ukraine this week to further his chaplain mission work there, but instead he is staying with friends Leo and Nadia Semenov in Atlanta, Georgia, awaiting a chance to get home to the rest of his family. Leo and Nadia have been actively involved in mission work for years in the United States and Leo acted as Yaroslav’s interpreter while he spoke to local churches.

Leo and Nadia are longtime friends and ministry partners with Alexander County resident Hal Hefner. When Mr. Hefner realized Yaroslav’s situation, he invited him to visit Alexander County to share his story and to seek support from local churches. In times of crisis, Christians find hope when uniting together in prayer and many people in Alexander County are looking for ways to assist the Ukrainians who have been devastated and displaced by Russian attacks.

Malko was able to visit Three Forks Baptist Church, New Life Christian Fellowship, and Smyrna Baptist Church, all in Taylorsville. He shared the passion he has for his chaplaincy work and how he has seen a spiritual revival throughout Ukraine. He believes that this is not just a political attack on Ukraine, but it is also a spiritual one. He says that the country of Ukraine has been becoming a light for Christ in Europe and it is his firm belief that this is “spiritual warfare from the evil one” to extinguish that light.

He shared about his beautiful and hospitable country. He says that he has seen “God’s Grace during these attacks, as the nuclear facility Chernobyl was spared, even though the area surrounding it was bombarded.” He also says he has seen “Truth revealed as Russian churches were burned or closed and church leaders were forbidden to meet. When this happened, Ukrainian leaders invited church leaders to meet within their country’s borders.” He has also seen “bravery as Ukrainian volunteers have stood up to the powerful Russian Army. Russia expected to take the capital of Ukraine within a few days, but their attacks were not successful even after 11 days. Yaroslav stated that his country currently has more volunteers than weapons. They are willing to fight, but are waiting on the necessary tools.

These are the perspectives from a Christian Ukrainian Chaplain whose priority is to bring the light of Jesus to the rest of the world. He receives communication from his family when possible and shares these reports with those who will listen.

Malko always ends his message with a call to prayer from all Christians. He said, “Please don’t forget about us.” He believes firmly that Ukraine will win this battle and that peace will be restored to that region, but he begs people around the world to remember Ukraine with prayers daily.

He compared Ukraine and Russia to the story of David and Goliath in the Bible. No one expected David to win with his tiny slingshot against the mighty Goliath and all of his armor and weaponry, but God made a way. Yaroslav Malko is believing in the power of united prayer around the world to help Ukraine win this seemingly impossible victory.

Yaroslav did not ask for money when he spoke, but there is a way to donate to the Ukrainian Refugee Relief Assistance. For more information, visit www.tear.org.
“Those who sow in tears, will reap in songs of joy.” Psalm 126:5.