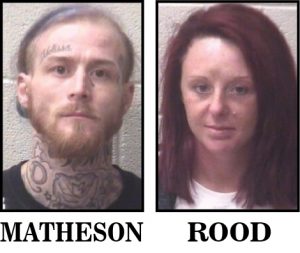 Two Taylorsville residents are facing charges after running their vehicle through a highway checkpoint and attempting to elude officers.

On Wednesday, March 9, 2022, at approximately 10:00 p.m., a traffic checkpoint was being conducted by Alexander County Sheriff’s Office at the intersection of Millersville Road and County Home Road. A vehicle approached the checkpoint but failed to stop, said Sheriff Chris Bowman. Officers pursued the vehicle onto NC Highway 16 South.

The vehicle stopped on Fox Hollow Drive off of Friendship Church Road. Two individuals were detained from the vehicle, Bowman related. After a search of the vehicle, officers located marijuana, methamphetamine, and drug paraphernalia.

Codey James Matheson, W/M, age 29 of Taylorsville, was arrested and charged with Felony Speeding to Elude Arrest. He was transported to the Alexander County Detention Center, where he was placed under a $15,000 secured bond with a first appearance date of Monday, March 14, 2022, in Alexander County District Court.

Stephanie Dawn Rood, W/F, age 30 of Taylorsville, was arrested and charged with Felony Possession of Methamphetamine and Possession of Drug Paraphernalia. She was transported to the Alexander County Detention Center, where she was placed under a $7,500 secured bond and had a first appearance date of Monday, March 14, 2022, in Alexander County District Court.