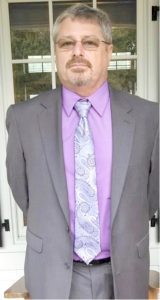 Joel “Joey” Paul Hendren, 63, began his journey on November 22, 1958, at Davis Hospital in Statesville. He was born to the late Paul and Betty Hendren.

His journey ended after an extended illness on Saturday, April 2, 2022, at his home in Stony Point.

He graduated from ACHS in 1976. He received his Associate Degree as an electrician from Mitchell Community College. He was an amazing electrician who loved what he did and worked endless hours on the side to help all that he could. He could never say “no” to anyone. He was loved by all he met.

He enjoyed traveling and rooting for the Carolina Panthers. He loved NASCAR and going to drag races. Joey was of the Baptist faith.
Preceding him in death were his parents, Paul and Betty Hendren.

There will be a graveside service on Wednesday, April 6, 2022, at 2 p.m. at Hiddenite Cemetery in Hiddenite. Rev. Thomas McDaniels will officiate. The public is invited to attend. There will be no formal visitation.