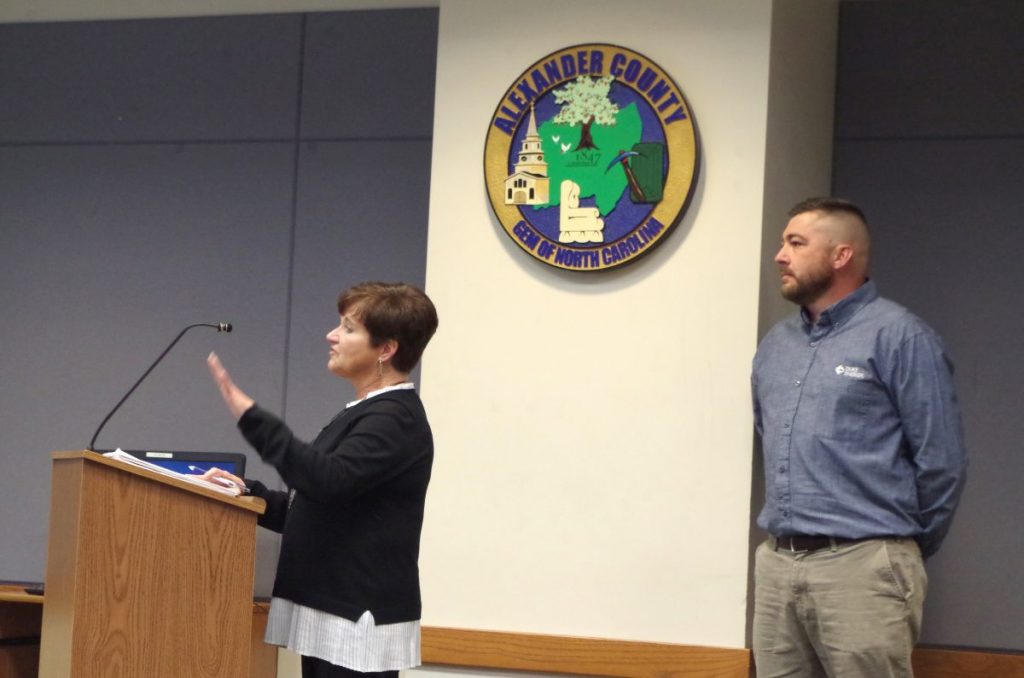 Following a public hearing (during which there were no comments) and presentation by Alisha Stamey, Park Ranger for the county, commissioners voted 4-0 to approve the proposed County Park Ordinance. In addition to the Courthouse Park, the ordinance governs use of Bethlehem Park, Dusty Ridge Park, East Park, Jaycee Park, Rocky Face Park, and the Wittenburg Access Area.

After opening May 15, the Splash Pad will operate April 1 to Sept. 30, seven days a week, from 8 a.m. to 8 p.m. No lifeguard will be on duty. Water footwear is strongly recommended.

• Duke Energy representatives briefed the commissioners on the Taylorsville Tie Project. This is part of the company’s Grid Improvement Plan to upfit the service lines and add a new circuit. Duke Energy personnel Robin Nicholson, District Manager, and Avery Dolinger, Senior Public Engagement Manager, related this to the board.

The substation next to East Taylorsville Baptist Church is part of the new circuit, which runs from the substation west along 1st Ave. Drive SE, then up South Center Street to Main Avenue and west to NC 16. Upgrades on the line on NC 16 north of town are complete, said Dolinger.

Traffic along West Main Avenue will be greatly affected during the line rebuild along the road. One lane will need to be closed where the crews will be working each day. Traffic control will be in place.

The work is expected to be completed by October.

Nicholson said the Tie Project will increase the reliability and efficiency of the power grid.

• Commissioners approved a Memorandum of Understanding (MOU) to enter a partnership with Spectrum to apply for a Growing Rural Economies with Access to Technology (GREAT) grant with the aim to offer broadband internet service to underserved parts of Alexander. Spectrum would build a fiber-to-the-premise internet network in unserved areas at a cost of $2,220,313 if the grant is awarded. Alexander County would provide a match of $250,000 using funds received from the American Rescue Plan Act (ARPA). This would bring fiber optic internet service to 390 homes.

Two weeks ago, the commissioners gave the nod for a similar MOU with YadTel/Zirrus at their April 4 meeting for a proposed $1,233,455 project, contingent upon receiving a GREAT grant, and requiring a County match of $163,815 using ARPA funds. If awarded, this project would provide internet service for 203 homes.

• County Manager Rick French presented Budget Ordinance amendments #85-88 and Project Budget Ordinances P-5 and P-6. Number 85 decreases the Juvenile Crime Prevention Council administrative budget based on estimated fiscal year 2022 expenses per Third-Quarter Accounting reports ($249). Number 86 increases the Fire/Emergency Services budget for FEMA Public Assistance Grant funds ($5,411.86) received to reimburse the Town of Taylorsville for damage from Tropical Storm Eta (flood damage to the Town-owned building occupied by Mtn. View Urgent Care) and restores fiscal year 2021 County funds with the receipt of FEMA funds in fiscal year 2022 to reimburse the County for payments to Sawmills Fire and Rescue for damage to their boat ($2,747.23) and Mooresville Fire and Rescue for damage to their boat and drone ($9,976.63) when these two agencies assisted Alexander during Tropical Storm Eta in November 2020.
Amendment 87 removes the amounts budgeted ($95,400) in the General Fund for stream debris removal at three locations, per the Emergency Watershed Protection Project. Instead of the General Fund, the project will be accounted for in a multi-year Special Revenue Fund since the work will take place over more than one year.

Number 88 increases the Planning Dept. budget $9,375 for a technical planning assistance contract with the Western Piedmont Council of Governments for the Alexander County Comprehensive Plan. The total fee for the 18-month contract is $56,220. The $9,375 covers estimated expense for fiscal year 22.

• In the County Manager’s Report, French said the Landfill will be closed beginning Friday, April 29, at 12:00 p.m. and will reopen on Monday, May 2, at 8:00 a.m. The closure will allow for repairs to the transfer station floor.

French invited the public to RockyFest on Saturday, April 23, from 10:00 a.m. to 4:00 p.m. at Rocky Face Park. Mr. French also invited citizens to the opening dedication and concert at the new Alexander County Courthouse Park on Sunday, May 15, beginning at 3:00 p.m. He noted that May 25 marks the tenth anniversary of Rocky Face Park.