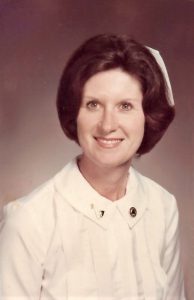 She was preceded in death by her parents, her son, Tim, and her sister, Gail.

Jacki attended Baldwinsville Academy and Central School, the University of Rochester, and Syracuse University. She received her B.S. in nursing from New York University.

After serving as a nurse/educator for several years, she moved into the medical marketing field and promoted Accu-Chek blood glucose monitoring. She finished her marketing career with CSI Behring promoting blood fractionation products.

Jacki was a volunteer for the Juvenile Diabetes Fund and Hemophilia of Georgia. She retired in 2007 but continued to work as a home health nurse in Hickory for several years.

In her final year, while suffering from Alzheimer’s, she was cared for with tenderness and love by Angie Taylor.

As a wife, mother, and friend, she was tireless in her service and sacrifice. She will be missed.