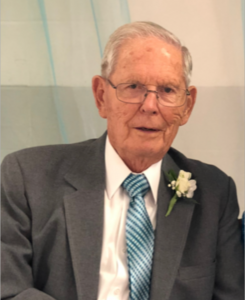 George grew up in Gaston County and moved to the Hickory area in 1957. He was employed by Central Telephone Co. where he was an installer/repairman. After working there for 30 years, he retired in 1997. He enjoyed gardening, fishing, home maintenance and especially family activities. He was active in his churches where he served as deacon and Boy Scout Master. He was always willing to help neighbors and family.

Visitation will be Friday, June 10, 2022, at 2:00 p.m. at Mt. Bethel United Methodist Church followed by the service at 3:00 pm. Burial will be in the church cemetery. Minister Dale Bost and Minister Jim Evans will officiate.

Condolences may be sent to http://www.alexfuneralservice.com.