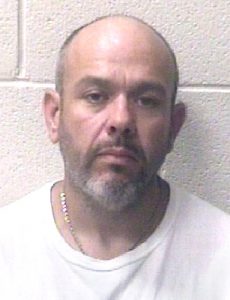 A Hiddenite man has been charged with multiple drug crimes after authorities say he was found to be in possession of large quantities of narcotics.

On Wednesday, June 8, 2022, the Alexander County Sheriff’s Office, the Taylorsville Police Department, and the Department of Homeland Security Investigations Task Force executed a search warrant on a residence in the Hiddenite Community, according to Sheriff Chris Bowman.  This search stemmed from an ongoing investigation lasting approximately seven months into narcotics trafficking in Alexander County.

The Sheriff’s Office seized a variety of narcotics from the scene, including 1,043 grams of fentanyl and 1,185 grams of methamphetamine, as well as drug paraphernalia.

Sheriff Bowman would like to thank the Taylorsville Police Department, Alexander County EMS, Catawba County Sheriff’s Office, and the Department of Homeland Security Investigations Taskforce for their assistance in this investigation.

Sheriff Bowman stated: “This operation will greatly impact the distribution of narcotics in Alexander County, as well as surrounding counties.”