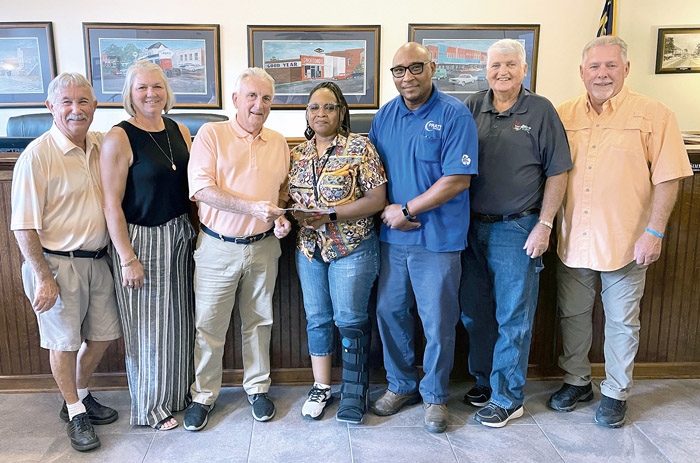 The Council voted unanimously to adopt the new budget with an addendum to the motion stating that new water rates would begin on Tuesday, June 28, instead of July 1.

Town Manager David Odom reviewed the entire budget, which totals $4,920,261. This is an increase of 1.4% to the total budget. Odom noted that the current property tax rate will remain at 40 cents per $100 valuation.

He presented the Budget Prep Baseline Goals for the General Fund, which were to:
1. Increase the Fund Balance with cash reserves to prepare for possible recession and to supplement the Water and Sewer Enterprise Fund;
2. Maintain a tax rate of 40/100;
3. Getting the Town’s part time help to $13.65 per hour;
4. Increasing base pay salaries to $33,654 including a bonus.

The Budget Prep Baseline Goals for the Water and Sewer (Enterprise) Fund were to:
1. Increase water and sewer rates to 6.25 per 1,000 gallons, meaning most customers using under 3,000 gallons will see an increase of $10.00 per month;
2. A new Increasing Block for users in excess of 250,000 gallons monthly should generate an additional $102,900 in annual revenues;
3. The overall goal is to get the Water and Sewer Enterprise Fund back to a positive position.

Odom reiterated that the deficiency in revenue received in the Enterprise Fund has been due to the lack of water usage by the Alexander Correctional Institution. The prison is the biggest water customer in the Town of Taylorsville and their lack of usage has caused a major loss in revenue to the Enterprise Fund.

Odom indicated that $300,000 of the $344,000 in American Rescue Plan money will be used to replace lost revenues in the Water and Sewer Fund.

In relation to the deficit of revenue in the Enterprise Fund, Manager Odom informed the Council that the Town of Taylorsville could potentially be designated as a distressed water unit under the Viable Utility Program.

In the most recent assessment, the Town of Taylorsville scored a 10, which meets or exceeds the threshold of 9 points for a combined water/wastewater system in order to qualify.

Odom said that being designated as a distressed water unit will help with state awareness that the Town of Taylorsville does not own the prison pump station and that it could help with future grant opportunities. The Council voted unanimously to request official designation to become a distressed water/wastewater system.

During the public comments section of the meeting, the Guy Long Commercial Developing Company presented their plans to develop 33 acres of land near the intersection of Hwy. 16 and Macedonia Church Road.

The land will be developed for single family homes and townhouses. The home values are estimated to be in the $350,000 range and the townhouses are estimated to be in the $220,000 to $230,000 range. This company will develop the land and then sell it for residential building purposes. This was presented to the Council for informational purposes only and a more formal presentation will be presented at a later date.

Anna Alexander and David Bond were presented with a $7,000 one-time Service Orientation Grant for their development of the “Wash Room, LLC,” located on Old Wilkesboro Road. During the Pandemic, there were no operational coin laundries in Taylorsville or Alexander County. The Town Council wanted to encourage the reopening of these facilities in order to serve the citizens of the community. This grant is a contract agreement between the owners of the business and the Town. Alexander and Bond have committed to keeping their business open for at least 12 months. Another coin laundry business, Happy Ours Laundry, was awarded the same grant earlier. Alexander and Bond have fully renovated the former Wash O Rama and their business met the criteria for the grant.

The Council entered into a Public Hearing regarding a rezoning request for a lot located behind Peoples Drug Store owned by RKM Campbell, LLC. The proposal, presented by Dustin Millsaps, the Western Piedmont Council of Governments Planner, was to change this property from residential to commercial. Millsaps stated that this would make the existing parking lot conforming and make it where the once landlocked property could be put to use to expand a parking lot. The Council unanimously approved this rezoning.

Millsaps also requested that action be taken to update the Town of Taylorsville Comprehensive Plan to indicate the correct name of the Mayor and the Town Council Members. No changes to the actual plan were proposed at this time other than the updating of names. The Council voted unanimously in favor of these updates.

The Council then considered engineering firms to provide comprehensive services for state directed funds for Project Wastewater System Improvements. Odom noted that only two engineering firms responded to the Town’s Request for Qualification (RFQ). The project will address reliability and capacity issues at the Paul Payne Wastewater Pump Station in the collection system and will replace vital equipment in the Wastewater Treatment Plant. West Consultants, PLLC from Morganton, NC, had more local references and more familiarity with the Town’s system so they were the recommended engineering firm included in the Resolution. The board unanimously voted to approve this firm.

To be proactive before the end of the fiscal year, the Council voted unanimously to transfer $65,500 from the General Fund to Line Items in the budget. This transfer was meant to ensure that no line items go one cent over budget on July 1st. If all of the money is not needed, it will be reverted right back into the General Fund.

Donnie Bost of Statesville requested three outside sewer taps for properties he is purchasing in Taylorsville. He will be developing these properties for residential use. The board unanimously voted in favor of the sewer taps for Mr. Bost.

David Odom reminded the Council and those in attendance that the House of Egg Roll and Pho will open this Saturday, July 2, for business.

He also stated that Duke Power will begin a work project on July 5th from the ABC store Westward in Taylorsville. Their work will take place from 8 p.m. until 6 a.m. daily and is expected to continue until October or November. Although Duke Power did not indicate there would be power outages, Odom said to be prepared in case those happen. He asked that citizens do not call emergency services if they experience power outages, but should call 1-800-Poweron to connect with Duke Customer Service.

Mayor Holleman noted that Taylorsville has been designated for the 20th year as part of Tree City USA. He said there is a new flag and a new sign at the entrance of Taylorsville.

The next scheduled Town Council meeting is Tuesday, August 2, at 5:30 p.m.