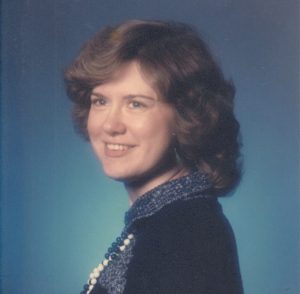 Char was born December 8, 1950, in Kenosha, Wisconsin, to Walter and Eleanor (Partenheimer) Jung. At a young age, Char accepted Christ as her personal Savior, was baptized, and attended Kenosha Bible Chapel with her family. She was the oldest of five children.

Char attended Roosevelt Elementary, Lance Junior High, and Tremper High School, all in Kenosha. At Tremper, Char played violin under Mr. Stanley Nosal for three years. Many of her lifelong friends were also members of the orchestra and band.

Following her graduation in 1969, she attended the Milwaukee County General Hospital, School of Nursing, where she achieved her national RN certificate.

On June 17, 1972, Char married her best friend, Wolfgang Salewski. They have two daughters, Beth and Michelle.

The Lord gifted her with skills, perfect for a nursing career. Char was softspoken, quiet, cheerful, a good listener, kind, and gentle. She worked at St. Mary’s Hospital in Racine, Wisconsin and then Kenosha Hospital, in different departments including the ER, CICU, and ICU. She also worked part-time for Advanced Ambulance Service.

Char enjoyed gardening, sewing, reading, camping, and volunteering at Bible Camp, whether in the kitchen or as camp nurse. She shared her love of music with her daughters, introducing them to music theater and plays. In her spare time, she stained and finished many pieces of furniture that graced their home.

In 2002, Char trained as a diabetic educator at the suggestion of a fellow nurse. Little did her friend know that Char was a Type 1 diabetic since the age of 6. She achieved her national certification in diabetic education (CDE) and was able to use those skills and life experiences to help many children and adults.

Char and Wolf moved to Taylorsville in the spring of 2004 to volunteer at Hickory Cove Bible Camp. She worked at Catawba Valley Medical Center as a CDE until her retirement in 2016.