A new group is hoping to improve the lives of convicted felons, reduce recidivism (the likelihood they will offend again), and create better outcomes for all Americans.

New Hope Initiative (NHI), incorporated a year ago, is “a collective of felons and families of felons who believe in the need for major criminal justice reform within our country and our communities,” explained Founder and President Chris Johnson, age 31, an inmate at Alexander Correction Institution in Taylorsville. (Johnson is serving a 20 year sentence for second degree murder in Buncombe County because he was attempting to prevent the sexual assault of a friend, he said. He also has a previous criminal history.)

As Johnson explains on New Hope’s website, “The inspiration for New Hope Initiative is the result of many years of self-reflection and personal experience enduring the many hardships that come with being a prisoner in America’s Prison System.”

“Just because they’re prisoners doesn’t mean they should be treated like animals,” said Cooper. 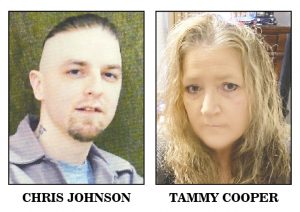 Johnson believes that there is a better way to fix the problems of crime and recidivism in America and he has made it his life’s mission to bring hope to the hopelessness that prisoners, felons, and their families face in the current criminal justice system.

After arriving in prison, Johnson said he vented to other inmates about what flaws he sees in the prison system as a whole. And his fellow inmates began to air their concerns and issues to him, too.

“I couldn’t sit back and let that continue,” Johnson said. “For the past eight and a half years, I’ve been doing research into the system, what’s missing, and what programs get stripped from budgets.”

Johnson said he and New Hope board members have methodically created plans to address each one of the issues he has either experienced or has been told about by inmates.

“I network with prisoners and talk with their families, too,” he explained.

Since he’s “inside,” Johnson needed help in getting the Initiative incorporated and in recruiting volunteers, which has been a slow process.

“Last year, we had some people really believe in our mission. We got a professional website created, a logo, and we’re trying to get people to see how vital and important this initiative is,” Johnson stated.

He hopes, through fundraising efforts, to be able to hire a staff for New Hope so that he won’t have to so heavily rely on volunteer workers, which tend to cycle off the team after a time.

New Hope will hopefully be a nonprofit entity soon, Johnson said. New Hope is a Christ-centered group, Johnson explained, adding that he gives all the credit to God for helping him to continue to advocate for positive change.

Although it is Christian based, New Hope will offer help to anyone, regardless of religion or other status.

Johnson said New Hope’s mission is from Isaiah 61:1, which states, “The Spirit of the Lord God is upon me; because the Lord hath anointed me to preach good tidings unto the meek; he hath sent me to bind up the brokenhearted, to proclaim liberty to the captives, and the opening of the prison to them that are bound…”

According to the U.S. Dept. of Justice’s Bureau of Justice Statistics, as of December 31, 2020, across the United States there were 1,691,600 incarcerated individuals and about 3.9 million on probation or parole.

Johnson said there are approximately 35 million ex-felons in the United States and, considering their family members, about 200 million people in the country who are directly affected by inmate issues in one way or another.

“Potentially, and very possibly, we can unite to be a family of two-thirds of the population of this country,” Johnson related.

The initiative’s multiple facets are to be phased in over the next 25 years.

One proposed project of the New Hope Initiative is the P4 Rehab Project, which the website describes as “our pathway program that assists the felon in seeing the effects of the destructive paths they’ve traveled; finding the passion that is in them and giving them the tools they need in order to turn that passion into purpose; and fully equipping them with the essentials to move forward with a hope for a prosperous future.”

Another proposal is the Felon Future Self project, which is described as “our identity and purpose instilling program that gives the Felon the ability to look into the future and make a decision about the person they are going to become, identify the barriers that will stand in the way, and plan on how to knock them down.”

Breaking the Cycle is another proposed project. This is a “prison diversion program, preventing at-risk youth and individuals from winding up in prison by allowing the ex-felons who have successfully become their future self to become Life Coaches and mentors to the ones who are on their way to prison in their lifestyles, guiding them through the same programs the ex-felon went through without having to go to prison, giving them the same resources and opportunities, without having to go to prison first.”

Felon’s Futures is another facet, a “three tier program that commits a felon to all the aspects of the New Hope system, in rehabilitation, education, and reintegration location, resources, and opportunities. This is the program we have a desire for as many felons in the country to participate in, as it covers every facet of their life and pairs them with a Life Coach that will be there for them with assistance and direction.”

Yet another part is the proposed Homes of Hope, which would employ felons who enjoy construction. This arm of NHI would renovate dilapidated and foreclosed homes and gift them to felons and their families who have lost everything due to their struggle with the criminal justice system.

Further, New Hope University would be set up to be an education provider, “initially afforded through contracts with third party educators, eventually becoming fully-accredited, offering felons an education in a field they have an interest in, inside and out of the walls of prison; as statistics show that less than 10% of prisoners who acquire a degree while in prison ever reoffend.”

Other projects are also proposed, including a Restorative Justice and Reentry Center, townhouses for stepdown housing and reentry to society, and the ambitious Hope Town, transitional housing in the form of a small township to be completely managed and sustained by felons.

These are only part of the multiple proposed programs Johnson and New Hope Initiative members have envisioned. He hopes to work against the stigma that all felons, once incarcerated, have nothing to offer and no longer deserve a role in society, as many portray convicted persons.

A possible funding method for these programs would be the creation and sale of X-Con Clothing, a line of clothing to help break down the stigma of “convict” or “felon” titles and featuring artwork and designs from felons and prisoners.

As Johnson writes on the New Hope website, “Absolute change is possible. And not only possible, but very well probable through the underlying Truth that is at the center of New Hope. If transformation is possible in a soul that used to be as dark as mine, then it is possible in anybody.”

Johnson said it is hoped some parts of the initiative can be put into place in a pilot program at one prison in North Carolina and then incorporated statewide. New Hope members are in communication with N.C. General Assembly members about integrating New Hope aspects into prisons.

Anyone interested in funding the New Hope Initiative may contribute online via Go Fund Me, https://gofund.me/35983fdc.

A Zoom online meeting for people interested in the New Hope Initiative is planned on Saturday, July 9, at 2:00 p.m. To sign up, visit facebook.com/TheRealNHI and click on the post about July 9 or go directly to: https://bit.ly/3yyQs6t or visit New Hope’s website, therealnewhope.org.