Among many months of preparations for the 2023 property revaluation coming next year, the Alexander County Commissioners approved a public hearing to be held Sept. 19 for the Schedule of Values for all properties inside the county. This consists of more than 25,000 parcels, including about 12,000 with improvements, such as a home.

Tax Administrator Doug Fox presented the item to the commissioners, assisted by Jimmy Tanner of Tanner Valuation Group, LLC. Fox said Tax Office staff have been visiting county parcels over the past two years to verify property data. He said this is the tax office’s first in-house parcel review, which would have cost $750,000 if outsourced. Tanner visited commercial properties and his firm completed the Schedule of Values.

Overall, the current ratio of property value increases is .58 (tax value divided by sales price) since 2015, for homes sold since January 1, 2022, Tanner said.

Tax value is set by state statute according to 100 percent of market value. For residential properties, assessors look at sales; with commercials properties, rents, sales, leases, and income data are considered.

The Schedule of Values is available for public inspection in the office of the Alexander County Assessor at 151 West Main Avenue and the County Administration office on Liledoun Road near ACHS.

Property owners can appeal their property values in several ways: to the Alexander County Tax Office, to the Alexander County Board of Equalization and Review, to the N.C. Property Tax Commission, to the N.C. Court of Appeals, and finally, to the N.C. State Supreme Court. Useful information to appeal a value includes: recent sales of similar properties, damage that may not be visible to tax staff, property characteristics that are incorrectly listed, a recent fee appraisal for comparison, and a recent sale/listing or buyer offer.

An equalization process will look at values the first, fourth, and seventh year after property revaluation.

Fox said his office would continue to monitor property sales and market conditions up until the first of the year.

Commissioner Marty Pennell stated he was glad to see the Tax Office had used examples from various parts of the county. Commissioner Josh Lail said the housing market had “gone insane” recently, and related it to the economic inflation the U.S. is experiencing.

Valuation notices are expected to be mailed to property owners in February or March 2023.

Alexander DSS Director Thomas Mitchell presented the Energy Assistance Outreach Plan to the board, which was unanimously approved. This administers home heating and cooling and weatherization assistance funds to residents.

Register of Deeds asks for job reclassifications for RoD staff

Alexander County Register of Deeds Scott Hines appeared before the board to request a job classification upgrade (not necessarily a pay increase) for his departments’ workers.

He indicated that he did not feel the current job classifications are commensurate with the large amount of critical legal paperwork and excise fee transactions his employees handle.

Hines related that the Register of Deeds and his assistant and deputy registers of deeds are public officers and must take an oath of office and can administer oaths. The office is part of the transactional process for land transfers and is at great risk of liablity.

County Commission Chairman Ronnie Reese said the county is in the middle of a pay study, which County Manager Rick French noted is not quite complete.

“I think it’s something we can take a look at,” said Reese of the request.

Number 4 budgets $24,000 for the remaining balance for the March 2021 contract to expand broadband service in Alexander. This work should be completed in fiscal year 2023. It also increases by $8,000 for shared revenue from the Town of Taylorsville’s Millersville sewer project. The Town earlier entered into an agreement to borrow money from the state for the Millersville sewer project, but asked the County to help with the payment each year, $15,000 per year through 2035. In return, the County receives half of the sewer collections and tap fees each year (shared revenue). The line also budgets $3,236 from the Detention Center budget for the portion of COVID mitigation grant funds to be spent in 2024.

Number 6 adds $120,000 for the Fire budget for an additional $5,000 per month to Ellendale and Hiddenite fire departments for responding to county-wide calls.

Project P-2 budgets $452,330 for the Alexander Industrial Park Sewer Project with half of the funding from the Appalachian Regional Commission and half from the N.C. Dept. of Environmental Quality.

P-3 budgets $750,000 from a $650,000 state grant (plus $100,000 local match) for an upcoming Housing Our Teachers Downtown Revitalization Project, in which further details will be announced soon.

The amendments were unanimously approved.

• Commissioners unanimously approved the reappointment of Gerald Davis to the Alexander County ABC Board.

• In the County Manager’s Report, French asked commissioners if they wanted to apply for an NC Parks and Recreation Trust Fund (PARTF) grant for the Bethlehem Park improvements. If awarded, the grant could total as much as $500,000, with a county match of the same amount. The park project is estimated at $1.3 million, so part of the upgrade could be completed while the grant application is submitted. Commissioners asked Mr. French to discuss the project with the engineer, gather some pricing information, and discuss the matter at the September meeting.
Mr. French said that Foundation Forward would like to set a date for a dedication ceremony for the “Charters of Freedom” monuments at the new Alexander County Courthouse Park. The date will be announced soon.
French also reported that the Gwaltney Community Building, which serves as a polling place during the general election, needs some repairs. He asked the board about providing a local grant of $1,000. It was noted that other community buildings also have needs. Mr. French said he would arrange a visit to the Gwaltney Community Building so commissioners can see the needs there. 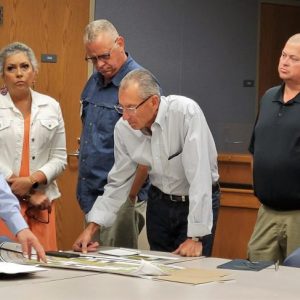