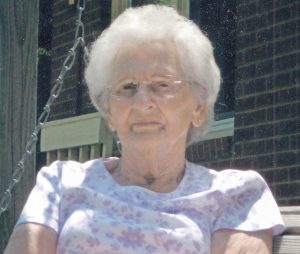 Lola Wyke Lowe, 92, of Taylorsville, passed away after a long illness on Sunday, September 18, 2022.

She was born in Alexander County to the late Virgil and Nan Munday Wyke. During her working career, she worked as a float sander. Mrs. Lowe enjoyed quilting, gardening, cooking, and overall was a homemaker for her family.

Along with her parents, she was preceded in death by her husband, James Columbus Lowe; daughter, Nanette Jolly; son, Jimmy Lowe; and three sisters.